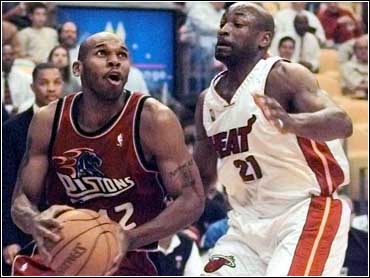 The Miami Heat are still a first-place team, and they played like one Monday.

With their 11-week stay atop the Atlantic Division at stake, the Heat responded by routing the slumping Detroit Pistons 104-82.

With a loss, the Heat would have fallen out of first place for the first time since Nov. 10. Instead they took a half-game lead over the New York Knicks.

Detroit's Grant Hill sat out with a bruised hip that has forced him to miss three games. His status remains day-to-day.

The Pistons have lost seven of their past eight games, and they've dropped six straight on the road. Coach Alvin Gentry, disgusted with the defeat, did not take questions from reporters after the game.

"When we play right and pass the ball, we're pretty good. When we don't, we stink," Gentry said. "We have to do it for 48 minutes. That's all I have to say."

Miami's Alonzo Mourning scored 20 points, reaching the milestone for the 10th consecutive game to break the team record he shared with Glen Rice.

Coach Pat Riley was especially pleased with the play of his bench, including Otis Thorpe, Clarence Weatherspoon and rookie Anthony Carter. Riley said his reserves will see more action in upcoming games.

"We're going to try to change things," Riley said. "The second unit is playing with a lot more energy than the first unit."

Miami held the NBA's second-ranked offensive team to 37 percent shooting. The Heat outscored the Pistons 50-24 in the paint.

Jerry Stackhouse had 17 points for Detroit but only seven after the first quarter. He sliced through the Miami defense for four dunks to help give Detroit a 20-16 lead before the Heat went ahead to stay early in the second period.

"We've got to play like we did tonight, and the wins will come," Hardaway said.

Without Hill, the Pistons struggled to find an offensive alternative to Stackhouse. They shot 5-for-15 in the second period, then did even worse in the third period 3-for-17.

Excluding his dunks, Stackhouse shot 2-for-13.

"We've got to find a way to be more supportive and optimistic," Stackhouse said. "When we do get down, we can't start flailing and falling apart. We literally fell apart tonight."