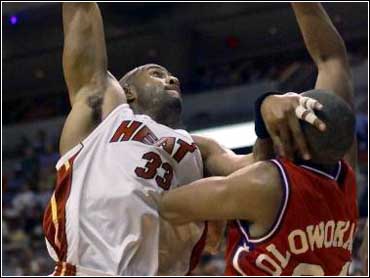 Alonzo Mourning said the "Heat of old" was back. For new Clippers coach Jim Todd, his team of old remained.

Jamal Mashburn scored 26 points to lead the Miami Heat to a 107-88 victory over the reeling Clippers on Tuesday night, handing Los Angeles its seventh straight loss and 17th defeat in 18 games..

The Heat, winners of five of six overall and a season-best six straight at home, got 20 points, 13 rebounds and eight blocks from Alonzo Mourning.

"We showed signs of going out there and outhustling and doing the little things tht win ballgames like the Heat of old," Mourning said. "The Heat of old would win in the effort department."

Miami outrebounded the Clippers 63-37, the Heat's largest rebounding edge of the season.

"We got our butts kicked on the glass, which is a little discouraging," said Todd, whose record since taking over for Chris Ford is 0-5.

The Clippers, losers of 13 straight on the road, were without rookie Lamar Odom, who stayed in Los Angeles nursing a sore right shoulder and tendinitis of his left knee. He played in the All-Star rookie game last weekend.

Also, Tyrone Nesby was sidelined with a broken toe.

"We caught a break without Lamar and Tyrone, two real athletic players that like to run," said Heat coach Pat Riley. "They tried to change their style and got caught somewhere in between."

"They killed us on the boards," Murdock said. "They pushed us around."

Voshon Leonard, who scored 15, had two 3-pointers and a layup during the spurt, and Mashburn scored 16 points on 6-of-8 shooting by halftime. He finished 9-of-14, including 4-of-6 on 3-pointers, and grabbed eight rebounds.

Mashburn hit two 3-pointers and Anthony Carter fed P.J. Brown for a fast-break dunk to cap a 14-5 run early in the third quarter to give Miami a 73-52 lead with 5:31 left. Carter had eight assists.

The lead ballooned to 30, 91-61, early in the fourth quarter after a dunk by Clarence Weatherspoon and a free throw by Mourning.

"I don't think the game was ever in doubt," Riley said. "It was our first game in nine days and I just didn't want us to let up."