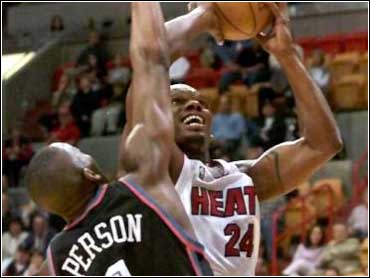 The Miami Heat are making themselves right at home in their new arena, while the Cleveland Cavaliers would rather be anywhere than on the road.

Things went according to form Friday night, with Tim Hardaway hitting two late jumpers as the Heat rallied to beat the Cavaliers 87-82.

"Down the stretch we made the plays to pull the game out," said Miami's Alonzo Mourning, who had only nine points after scoring 43 Wednesday night against New Jersey.

"It could have been a lot easier, but we'll accept the 'W'," Brown said. "In the new arena, we didn't know where the spots are, but we're getting to learn."

The Atlantic Division-leading Heat have won eight straight at AmericanAirlines Arena, while the Cavaliers have lost 11 in a row on the road and are 4-23 overall on the road this season.

"It was an up-and-down game for us," Heat coach Pat Riley said. "I thought we had some real good opportunities in the first half. We began looking for shots instead of executing and it caught up with us in the second half."

Lamond Murray led the Cavaliers with 28 points. Andre Miller added 12, including a 3-pointer with 27.9 seconds left, and Shawn Kemp had 10 points and 10 rebounds.

The Heat squandered a 14-point second-half lead and were down by five early in the fourth quarter before Voshon Lenard hit a 3-pointer and a short jumper to tie it 68.

"It looked like we were dead in the water and Voshon made a couple of huge shots that got us back in it," Riley said.

With Miami down by one with 4:15 to play, Hardaway made a 13-footer to put the Heat ahead for good at 77-76. Dan Majerle then scored off a rebound, Mashburn had a driving layup, and Hardaway hit another jumper to push Miami's lead to seven at 83-76.

"They made shots at the end of the game and we didn't," Cavs coach Randy Whittman said. "Down the stretch, you have to make plays and give yourself opportunities, not make turnovers."

Kemp said the new venue is a tough place to shoot in.

"It's a good gym, it's just a weird atmosphere," he said. "There's a lot to look at other than the rims."