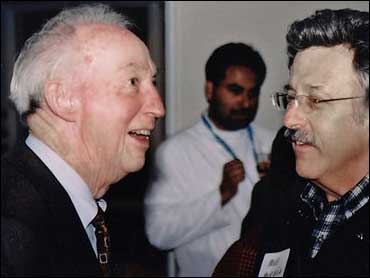 Dr. Norman Shumway, the first surgeon to perform a heart transplant operation in the United States, died Friday of lung cancer, a Stanford University spokeswoman said. He was 83.

"He was such a remarkable man— an incredible talent, a fine wit, and at the same time very humble," said colleague Bruce Reitz, who worked at Stanford School of Medicine and knew Shumway for 37 years.

Shumway completed the first successful U.S. adult heart transplant in 1968, but he may be best known for continuing with transplant research as many others quit.

During the 1970s, when most recipients died soon after their operations because of organ rejection or infections, many surgeons became discouraged and stopped performing transplants. But Shumway stuck with it and built a large transplant research team at Stanford that found ways to overcome rejection problems.

Shumway developed tests that enabled the use of smaller doses of dangerous rejection drugs and was one of the first transplant surgeons to begin using the safer rejection drug cyclosporine.

Mike Kasperak, 56, his first transplant patient, died 14 days after the 1968 operation and never left the hospital. Now, it's common for patients to live decades.

During the early 1960s, Shumway developed a heart transplant technique on dogs that was used by Dr. Christiaan Barnard, who transplanted the first human heart in December 1967.

Later, Shumway and Reitz completed the first successful heart and lung transplant in the same patient at the same time, in 1981.

"He was my mentor at Stanford 20 years ago," Frist said during a July speech at the Commonwealth of California Club in San Francisco. "Dr. Shumway is the father of heart transplantation. When everyone said heart transplants couldn't be done, he knew they could. He believed. And he worked against great odds to perfect the science."

He earned his medical degree from Vanderbilt University in 1949 and doctorate from the University of Minnesota in 1956.

He arrived at Stanford in 1958 as a surgery instructor and remained at the Palo Alto campus for the rest of his career.