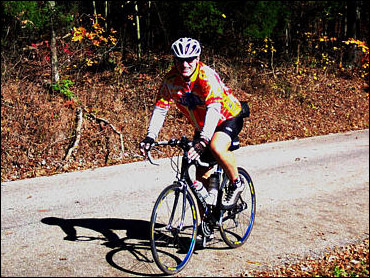 A man who took up bicycling after bypass surgery gave him a second chance at life died of a heart attack the day after completing a 2,400-mile, cross-country trip.

Broc Bebout, a 57-year-old retired engineer, died Thursday on the van drive back to his home in Anderson, about 25 miles northeast of Indianapolis, one day after completing the bicycle ride from Carlsbad, Calif., to Brunswick, Ga.

His wife, Patricia Brinkman, said bicycling became Bebout's ticket to nearly 20 years of good health after quadruple-bypass surgery at age 39. He also learned to eat right and take care of himself, she said.

Bebout and another man closed their eyes for naps during the drive home after discussing heart rate monitors and other equipment, said Janech Davenport, director of Wandering Wheels, the cycling group that organized the trip.

The van driver later looked in the rearview mirror, and saw Bebout's eyes were open.

"He was struggling, not breathing," Davenport said. "His spirit was gone. Whatever made Broc was gone."

In an e-mail to his wife Wednesday before a celebratory steak dinner, Bebout described what the trip had meant to him: "An incredible experience with incredible people."

"It was a trip of a lifetime," Brinkman said. "We all have a list of things we like to say we did. That was right up there at the top."

Pat Miller, a retired Anderson University health professor who also was among about 30 people on the cross-country ride, said Bebout was taking medication for his heart and for arthritis and had been coughing for a couple of weeks.

"He had days he was very good and seemed strong, and he had days he felt like a lot of us did, slower, took longer to get in," Miller said.