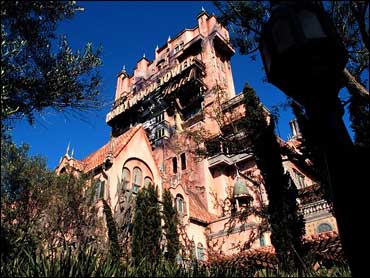 A 16-year-old British girl suffered cardiac arrest after stepping off a Disney World thrill ride, one month after a young boy died after going on another attraction.

Leanne Deacon of Kibworth, Leicestershire, felt strange but told her mother she'd quickly recover after exiting Disney World-MGM Studios' "The Twilight Zone Tower of Terror," which depicts a haunted plunging elevator ride, said Jim Solomons, an Orange County Sheriff's Office spokesman, on Tuesday. However, Solomons said the girl's condition deteriorated so rapidly that her heart stopped beating and she had to be resuscitated by emergency workers.

Leanne is in critical condition and was transferred Tuesday night from Florida Hospital Celebration Health to the facility's main campus at Florida Hospital Orlando, about 20 miles away, according to hospital spokesman David Oakley.

Solomons said the teenager was seen by a neurosurgeon to determine what caused her injuries. Solomons said no other passengers have complained of injuries, and "we're satisfied that everything seemed to function OK on the ride."

Disney said in a written statement that the ride has been shut down until more information is available.

"Our concern is for the family and we are working with them to provide whatever assistance they need," the statement said.

On the Tower of Terror, which depicts a haunted hotel, riders are placed in an elevator, which shoots up 13 stories and then plummets back twice.

A medical examiner's report said Land was in poor health from diabetes and several ministrokes and her death "was not unexpected." The cause of the boy's death remains under investigation.

Florida's major theme parks are not directly regulated by the state, and instead have their own inspectors.