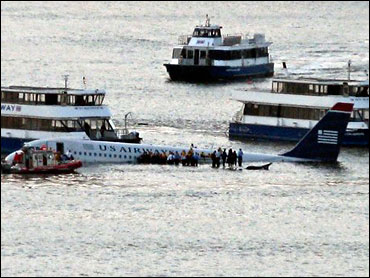 Even after Flight 1549 glided to a near-perfect forced landing on the Hudson River in January, the plane and its 155 passengers and crew came within inches of catastrophe when someone cracked open a rear door, sending water gushing into the cabin.

Who opened the door is one of the questions the National Transportation Safety Board hopes to answer during three days of hearings on the accident beginning Tuesday. Other issues include crew training for forced water landings and dual engine failures, whether aircraft standards for ditching are adequate, bird detection and mitigation efforts at airports, and whether engine standards need to be toughened to withstand collisions with large birds.

Had the door been opened wider, the Airbus A320 would likely have flooded and sank immediately, said one experienced crash investigator. Even the slight gap in the door caused passengers in the rear to struggle through rising water to get to safety.

"It probably would have gone down tail-first very quickly, probably in 30 seconds to a minute, which means some of the people probably wouldn't have gotten out," said William Waldock, who teaches air crash investigation at Embry-Riddle Aeronautical University in Prescott, Ariz.

Air in partially empty fuel tanks helped their plane stay afloat. Water also was coming into the cabin from a rupture in the fuselage near the tail cone.

Flight 1549 had just taken off from LaGuardia Airport in New York on Jan. 15 and climbed to about 3,000 feet when the plane hit a flock of Canada geese and lost thrust in both engines. Capt. Chesley Sullenberger decided to ditch into the Hudson rather than risk crashing in the densely populated area of New York and New Jersey. Everyone aboard survived.

"I would have to say if things were just a little different that day we could have had a different outcome for sure," said board member Robert Sumwalt, who will chair the hearing. "We want to understand as much about this accident as we possibly can."

One of the first issues on the board's agenda is whether a passenger or a flight attendant opened the rear door after the plane landed. How much training cabin crews receive on how to evacuate passengers in a forced water landing is another.

The first scheduled witnesses are Sullenberger and Billy Campbell, one of 145 passengers interviewed by the NTSB.

Sumwalt said in an interview on Friday that Campbell, who was seated in the second-to-last row, had contradicted flight attendant Doreen Welsh's claim that a panicked passenger opened the door. NTSB spokesman Peter Knudson said Monday that Sumwalt was mistaken about Campbell's account and that passengers' recollections of who opened the door were inconsistent.

"We may never determine how the rear door was opened," Knudson said.

Before Flight 1549, crew training for a forced water landing had not received much attention from airlines because there have been so few water crashes where there was a reasonable expectation most passengers might survive, Waldock said.

"I think it was probably right down at the bottom of everybody's priority list of issues," Waldock said. "It's an issue they're looking at a lot more closely now."

Many airlines still don't warn against using the rear doors for passenger evacuation in event of water landing, he said.

Another concern is whether the FAA and airlines need to revise emergency procedures for pilots in the event both engines fail. Those procedures usually involve a sequence of many steps called a checklist. There are different checklists depending upon the problem, but most are based on the expectation that the problem will occur while the plane is flying at a high altitude - airliners typically cruise above 20,000 feet, giving pilots time to identify and correct the problem.

Flight 1549's first officer, Jeffrey Skiles, told a congressional panel in February that he only had time to make it part of the way through a checklist for restarting the engines when Sullenberger sent the plane into the river.

Sumwalt suggested it would be better for airlines to train pilots to remember one procedure for a low-altitude dual engine failure, rather than go through a long checklist of items while altitude rapidly diminishes.

"If there's not a Hudson River out there, they're going to crash," Sumwalt said.