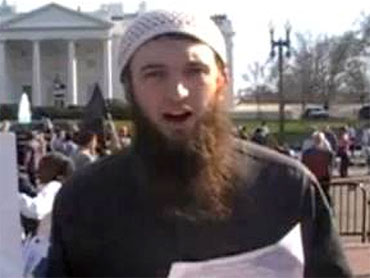 A detention hearing for a Virginia man charged with twice trying to join a Somali terror group linked to al Qaeda has been continued.

Twenty-year-old Zachary Chesser, known for an online warning against the creators of the animated series "South Park," will remain in custody at least until Monday afternoon's hearing.

Chesser's wife declined comment at Friday's hearing, as did his attorney Michael Nachmanoff.

The hearing in U.S. District Court was on charges of providing material support to the al-Shabab terror group, which claims responsibility for a July 11 bombing in Uganda that killed more than 75 people.

Chesser is not charged for an online posting saying the creators of the animated series "South Park" risked death by mocking the Prophet Muhammad.

A court affidavit also states that Chesser corresponded with the radical cleric Anwar al-Awlaki last year, and received two responses. Al-Awlaki is a U.S. citizen living in Yemen who was recently designated a terrorist by the U.S. government. Al-Awlaki is believed to have corresponded with several alleged terrorists, including Maj. Nidal Malik Hasan, the U.S. Army psychiatrist accused of killing 13 people in November at Fort Hood, Tex.

Federal public defender Michael Nachmanoff was appointed to represent Chesser on Thursday, along with Brian Mizer, a former Navy officer who represented Salim Hamdan, the one-time driver for Osama bin Laden, in a military trial at Guantanamo Bay in 2008.