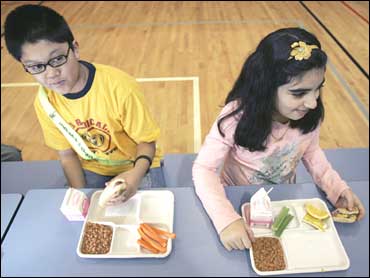 The cafeteria lunch line at Columbus Elementary School moves quickly as students grab portions of carrots celery, apples and oranges. French fries and hamburgers, once cafeteria staples, are not even offered.

"I eat carrots or apples every day," said 10-year-old Alan Espino. He said he did not notice that the bun holding his all-beef hot dog was whole wheat. Even the pizza available in the cafeteria has whole wheat crust.

The school cafeteria looks radically different from those of his parents' generation, and it appears many kids are not turning their noses up at the new offerings. In fact, according to a survey of food service directors, french fries are decreasing in popularity and interest in carrots is skyrocketing.

As choices on the lunch line change, many children are accepting them, said Martha Conklin, an associate professor at Penn State University who conducts research about school nutrition programs and school food service.

"If you present these healthy offerings to children, they may turn them down the first time, but you can't give up," she said. "Children will adapt. Choice is important, but they can make those selections from healthy offerings."

The School Nutrition Association's annual survey given to food service directors around the country shows just that. Among students in kindergarten through 12th grade, french fries dropped in popularity from 1998 to 2006, while carrots and fresh vegetables rose in popularity.

"We are dealing with much more sophisticated audiences now, and we working hard to meet their needs in a healthier way," said Janey Thornton, the association's president.

A 2004 wellness program requires school districts receiving federal reimbursements for school meal programs to develop policies that promote the health of students and address the growing problem of childhood obesity.

In 2005, at least 17 states enacted some form of school nutrition legislation and at least 11 more approved them last year.

A New Jersey law requires that, by next fall, snacks and a la carte items sold or served contain no more than 8 grams of total fat per serving and two grams of saturated fat per serving. Candy is banned and so are foods and beverages with sugar as the major ingredient.

The law is an attempt to establish a culture in which eating nutritiously is the accepted social norm, said Emma Davis-Kovacs, acting state director for the New Jersey Department of Agriculture's division of food and nutrition.

"The leading health authorities are all recommending that schools take an active role in this area of nutrition to prevent disabling chronic health conditions," she said.

"The children wouldn't eat it. It didn't look right to them," he said. "Now their dining preferences have changed and they're now accepting of making healthier dining options."

Pat Johnson, food service director in the Maplewood and South Orange district, said she started reforming her cafeterias before the new state law. The district is renovating its kitchens to remove fryers and add grills and ovens.

She said younger children seem more open to tasting healthier foods and are likely to continue the patterns to middle and high school.

"If you put it there and make it look appealing to them, they like it," she said.