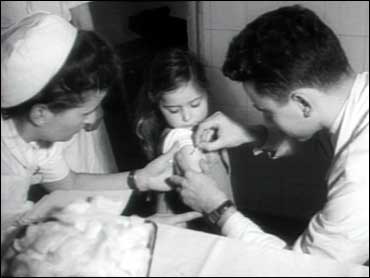 Many doctors and nurses nationwide are wary of President Bush's suggestion that they be vaccinated against smallpox, and some hospitals have rejected the proposal as too risky for their employees.

"There are concerns about the efficacy of the vaccine and the risk for taking the vaccine," said Jim Lott, spokesman for the Hospital Association of Southern California. The group represents 190 private and public hospitals.

"On rare occasions, we hear about people who say they want to step up and serve their country," he said. "But we're hearing more the other way," with employees raising questions.

Seeking to be prepared for attacks with biological weapons, the Bush administration has ordered a half-million U.S. soldiers in high-risk regions to get smallpox vaccinations, and proposed voluntary vaccinations for millions of health care workers.

Jim Bentley, a senior vice president of the American Hospital Association, said most hospitals seem willing to participate, others are deliberating, and a few have indicated they do not want their staff vaccinated.

Among the reluctant facilities are Grady Memorial Hospital in Atlanta and Virginia Commonwealth University's health center in Richmond, Va.

Dr. Richard Wenzel, chairman of Virginia Commonwealth's infectious disease department, said the hospital would support the program if a single case of smallpox were reported or if federal authorities warned of imminent danger of an outbreak.

"Meanwhile, it is difficult to support the decision to vaccinate hospital personnel when there has been no case of smallpox seen for 30 years," Wenzel said Wednesday.

There is a "very large probability" that vaccinating hospital workers would result in transmission of the disease to people whose resistance had been lowered by HIV infection and other conditions, Wenzel said.

"When we weigh the risks and benefits, we choose to come down on the conservative side," he said.

However, Bush's proposal has been embraced elsewhere.

"We do have a plan to give the smallpox vaccinations," said Kristin Foley at Seattle's Harborview Medical Center. "This is not an issue for us."

Dr. J.D. Miller of Appalachian Regional Health Care, which operates nine hospitals in Kentucky and West Virginia, said many employees strongly supported the program and were anxious to get vaccinations.

Hospitals in Iowa are discussing the program, said Kevin Teale of the state Department of Public Health, "but we haven't been given a flat-out no by anyone."

The American Medical Association has endorsed the concept of voluntary vaccinations for health care workers, but says it will monitor the program for possible complications.

The American Nurses Association has been even more cautious.

"We want people to be able to make an informed decision," the association's president, Barbara Blakeney, said last week. "I do not believe we have the answers we need to make that informed decision."

Blakeney said nurses, like other hospital workers, were worried about questions of liability and whether they would be compensated for treatment of possible side-effects caused by vaccinations.

"It is our duty to protect, as much as possible, those persons who would step forward to protect us all," Blakeney said.

Under the federal plan, civilian vaccinations will proceed in two phases. They will begin in a few weeks for about 450,000 people — including emergency room staff — most likely to encounter a highly contagious smallpox patient.

Later, vaccinations will be offered to about 10 million additional emergency responders, including police officers, firefighters and a wide range of health care workers. Health officials predict about half of this group would agree to vaccinations.

Connecticut's 32 hospitals are coordinating their response to Phase One of the program, asking about 150 people at each hospital if they are willing to be vaccinated. Those employees will go through an education program before making a final decision.

In Minneapolis, the Hennepin County Medical Center is recruiting volunteers to be vaccinated and then serve on a special smallpox response unit. The center hopes for 200 volunteers, but could operate the unit with as few as 40, said emergency preparedness director Mark Lappe.

Initial interest is high, Lappe said. "But what many other agencies across the country have experienced is once people look more closely, there's a significant drop-off."