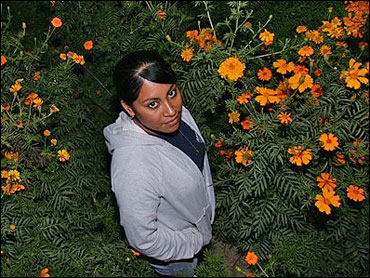 A thick tangle of marigolds reaches chest-high around Caritina Cruz, who plucks one of the deep orange flowers and explains to her little sister how to prepare it in a tea that soothes indigestion.

With Cruz's care, the plot eventually will sprout plants that immigrants from Mexico's dozens of indigenous groups may use to treat everything from insomnia to stomach cramps.

The garden was planted with the help of a nonprofit group and is part of a larger effort to preserve health care customs that predate the Spanish conquest even as community leaders work to forge ties with the local medical establishment.

"I want to keep what we know and be able to use what's here, too," said Cruz, 19, standing in the patch of dirt she hopes will preserve the community's health and its cultural identity.

Members of Mexico's 60 Indian groups are even more likely than other recent immigrants to fall outside the reach of the American health care system, said Nayamin Martinez Cossio, of the indigenous organization Centro Binacional para el Desarrollo Indigena Oaxaqueño.

Often discriminated against in Mexico, they also are "at the bottom of the ladder" in the United States, said Jonathan Fox, a researcher at the University of California, Santa Cruz.

The 2000 Census showed there were about 154,362 such immigrants in the state, according to an analysis by researchers at UC Santa Cruz.

Mexico's indigenous groups also are making up a growing share of migrants entering the country, according to estimates from the National Agricultural Workers Survey.

Between 1993 and 1994, Mexicans from states such as Oaxaca, Chiapas and Guerrero accounted for 9 percent of immigrant farmworkers coming to the country, a figure that rose to 19 percent between 2001 and 2002.

"They're difficult to reach and they're difficult to treat because they travel so much," said Norma Penalosa, a communicable diseases specialist with Fresno County's Department of Community Health. "One case can become many cases spread around the country."

Martinez and others with Centro Binacional also have sent 15 immigrants who speak a variety of Indian languages to train as interpreters at the Monterey Institute of International Studies.

They've delivered workshops in far-flung rural towns on AIDS prevention, diabetes, nutrition, and other health problems farmworkers might come across in the United States.

And they brought three traditional healers to California for a November conference where the healers told their American counterparts about how they rely heavily on herbal remedies and rituals to treat diseases.

Several doctors attending the conference said having access to traditional medicine can comfort patients by giving them a connection to home — something Western doctors can't do. But they also warned against relying only on traditional healers and herbs.

Jesus Rodriguez, a family practitioner at Fresno's Sequoia Community Health, encourages his patients to bring in any herbal remedies they might be taking so he can evaluate them and work them into a regimen that might include conventional medicine.

"They'll go to a healer for as long as they can and by the time they come in, they might have advanced diabetes and be at risk for losing a limb," Rodriguez said.

Enriqueta Contreras, a Zapotec midwife, said that being in a foreign land where nothing is familiar can itself be a source of physical and mental illness.

"They are away from their family, their language. They can't get the herbs they're used to," Contreras said in Spanish. "They don't know who they are anymore. That makes them sick."