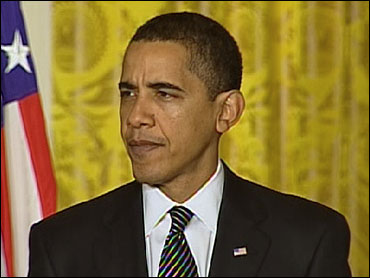 Your lungs may work just fine, but the estimated price for universal health care could take your breath away. Health policy experts say guaranteeing coverage for all Americans may cost about $1.5 trillion over the next decade. That would be more than double the $634 billion 'down payment' President Barack Obama set aside for health reform in his budget.

About 48 million people are uninsured, and the problem is only expected to get worse because the cost of coverage keeps rising.

Still, administration officials have pointedly avoided providing a ballpark estimate for Obama's fix, saying it depends on details to be worked out with Congress.

"It's impossible to put a price tag on the plan before even the basics have been finalized," said White House spokesman Reid Cherlin. "Here's what we do know: The reserve fund in the president's budget is fully paid for and provides a substantial down payment on the cost of the reforming our health care system."

The potential for runaway costs is raising concerns among Republicans and some Democrats as Congress prepares to draft next year's budget. The U.S. spends $2.4 trillion a year on health care, more than any other advanced country. And some experts estimate that a third or more of that goes for tests and procedures, rather than prevention and treatment.

The health care plan Obama offered as a candidate would have cost nearly $1.2 trillion over ten years, according to a detailed estimate last fall by the Lewin Group, a leading consulting and policy analysis firm. The campaign plan would not have covered all the uninsured, as most Democrats in Congress want to do. But it is a starting point for lawmakers.

John Sheils, a senior vice president of the Lewin Group, said about $1.5 trillion to $1.7 trillion would be a credible estimate for a plan that commits the nation to covering all its citizens. That would amount to around 4 percent of projected health care costs over the next 10 years, he added.

The cost of covering the uninsured is "a difficult hurdle to get over," Sheils said in an interview.

"I don't know where the rest of the money is going to come from," he added.

Some of the leading advocates of coverage for all use cost estimates around $1.5 trillion.

"Honestly ... we can't do it for the $634 billion the president put in the reserve fund," John Rother, public policy director for AARP, told an insurance industry meeting in Washington last week.

"In all likelihood, it will be over $1 trillion," he added, citing his own estimate of $1.5 trillion.

Economist Len Nichols, who heads the health policy project at the New America Foundation, said guaranteed coverage will cost $125 billion to $150 billion a year when fully phased in.

White House budget director Peter Orszag told the House Budget Committee earlier this month that the president's $634 billion fund is "likely to be the majority of the cost." Roughly half of the money would come from spending cuts, and the other half from tax increases.

But whether the $634 billion represents 50 percent, 60 percent or 70 percent of the cost "will depend on the details of whatever is finally done ... as we move through the legislative process," Orszag added.

The overall cost matters because the expansion of health coverage is meant to be a permanent reform. That means future generations will have to bear the cost.

"We are dealing with huge numbers," said David Walker, a former U.S. comptroller general and now head of the Peter G. Peterson Foundation, a group that promotes fiscal responsibility. "We need to have a much better sense of what we are talking about doing, and whether or not it's affordable and sustainable over time."