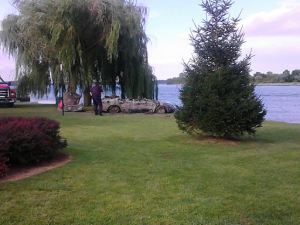 (CBS) WYANDOTTE, Mich. - Police say a headless body found in a car submerged in the Detroit River Thursday matches the description of Thomas Lange, who was 30-years-old when he went missing in late December of 2003, CBS Detroit reports.

A friend said Lange was at a bar in Allen Park when he made a cell phone call and then disappeared.

"We called the dive team in; recovered the vehicle out of the water. There was a body in the backseat of the vehicle," Pouliot said, according to the station.

"It looks like a larger male, as far as height, clothing in tact but there is no head, they're missing the hands and the feet were off also, but they were in the shoes," Pouliot said.

Police said clothing on the body appeared to match what Lange was last observed wearing.

Lange's I.D., some additional bone sections and a skull were reportedly later found by a search and recover team in a nearby river.

The remains were turned over to the Wayne County Medical Examiner. An autopsy will be conducted to determine a cause of death and confirm the man's identity.

Police said the vehicle in which the body was found - a Mercury Sable - was reported stolen in 2004, according to CBS Detroit.

An investigation by Wyandotte and Lincoln Park police is ongoing.