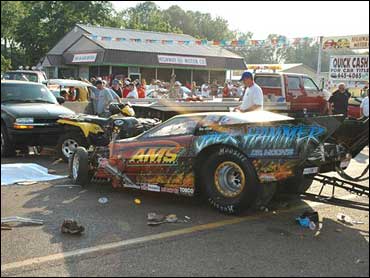 Amid towering trees that are among Earth's oldest and largest living things, President Bush pledged Wednesday to protect "these works of God" and other natural treasures from mankind.

Sequoias taller than the Statue of Liberty, broader than a bus and older than the Roman Empire served as a backdrop while Bush sought to answer critics of his environmental policies.

"Our duty is to use the land well, and sometimes not to use it at all," the cowboy boots-clad president said at the close of a three-day West Coast trip.

He announced a new directive calling for rangers to conduct annual reviews of each national park and renewed his move for a five-year, $5 billion effort to cut back the parks' heavy maintenance backlogs.

In advance of the trip, the administration announced it would let stand a proposal approved in the last days of the Clinton presidency to clean up hazy skies over national parks and wilderness areas. It would require older coal-fired utilities, among others, to be retrofitted with new pollution-control technology by 2013.

"Had Christ himself stood on this spot, he would have been in the shade of this very tree," Mr. Bush said in a speech that touched on the moral imperative to protect the Earth.

"There's much to admire and appreciate in the works of man. But come here, and you're reminded of a design that is not our own," he said. "We find a grandeur beyond our power to equal."

But even with his promise to protect the world's largest tree and other national treasures, environmental groups are giving the president a 'D' for his treatment of national parks, reports CBS News Chief White House Correspondent John Roberts. For every proposal he has made to preserve the great forests and wilderness areas, they say he has made another that could threaten them.

"This is another presidential PR stunt and its designed simply to put Band-Aids on a very, very wounded environmental record," said Phil Clapp of the National Environmental Trust.

Environmentalists point to the president's plan to drill for oil and gas in the Arctic National Wildlife Refuge (ANWR), and to open more federal lands to logging and mining. And they say his plans to clear up the haze stand in contradiction to proposals in his energy plan to ease restrictions on coal-fired power plants.

"The president likes to talk a lot about national parks, but so far he hasn't put his money where his mouth is," said Clapp.

As the president left the park for a visit to an elementary school at nearby Dunlap, Calif., in the Sierra Nevada foothills, his motorcade passed about 30 protesters carrying signs protesting the administration's environmental policies. Among the signs where "No drilling ANWR" and "Protect what's left."

With polls showing voters skeptical of his commitment to the environment, advisers say Mr. Bush plans a series of trips and events that reflect deep concern for natural resources. He is scheduled to announce new protections for te Everglades during a trip to Florida on Monday and Tuesday.

"We cannot see into the centuries ahead, but we can be sure, in a place like this, that we're in the presence of enduring things. And it will be to our lasting credit if these works of God are still standing a thousand years from now," the president said.

In broad strokes, Mr. Bush outlined a philosophy that calls for a balance between environmentalism and sound economics. Washington plays a major protective role, he said, but "states and localities have their own responsibilities for the environment."

He added: "We must protect the claims of nature while also protecting the legal rights of property owners."

Before his speech to about 130 National Park Service employees and their families, the president hiked for about 20 minutes to the summit of Moro Rock, a barren 6,500-foot-tall granite dome. He marveled at the 13,000-foot peaks to the east and California's sprawling central valley to the west.

Walking gingerly toward the edge a cliff, the president told reporters, "It's something else up here, isn't it? I'm impressed you guys made it."

Accompanied by Interior Secretary Gale Norton, the president also stopped at the 275-feet-high General Sherman Tree, a sequoia thought to be one of the largest living things on Earth, estimated at more than 2,100 years old.

A wide array of maintenance issues plague the 57 national parks and 327 other natural and historic sites that comprise the National Park System.

The White House provided for no new park acquisitions in its budget request to Congress this year. Instead, the Interior Department was told to focus on Bush's campaign promise to clear up a $4.9 billion backlog of park maintenance and repairs.

Mr. Bush sent Congress a proposal last month to pay for a portion of his pledge — $439.6 million for the fiscal year that begins Oct. 1.