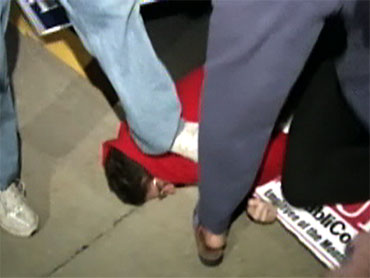 The woman who was wrestled to the ground and kicked in the head for holding a critical sign at a Rand Paul event says that the violence was "premeditated" and that her partner heard Paul supporters say, "We're here to do crowd control and we might have to take someone out."

Valle, a political activist hired by the liberal group MoveOn.org, attended a debate Monday night between Paul, the Republican candidate for U.S. Senate in Kentucky and his Democratic opponent Jack Conway. When Paul arrived, she moved toward him so that he could see the sign she was holding and was wrestled to the ground by Paul campaign volunteers.

As she was held down, volunteer Tim Profitt placed his foot just below her head and stomped down. (See video below).

"What happened was when they realized that I was there, they actually formed a circle behind me and then as the car pulled up - before Rand was even out of the car - … they stepped in front of me," Valle said. "So I stepped off the curb and around them. And then they actually pursued me around the car. This was premeditated."

Valle was wearing a wig and was dressed satirically as an employee of "RepubliCorp" as part of a MoveOn project to highlight ties between corporate money and the GOP, she said. She wanted to present Paul with an RepubliCorp "employee of the month" award.

Profitt said after the attack that he had feared for the candidate's safety, but Valle said all she wanted was for Paul to see her sign.

"I think [Paul supporters] knew who I was from the past two weeks, me being in town. And they didn't like my message, what I was there to say. And I was simply there to hold a sign," Valle said. "But, that wasn't - wasn't okay with them."

Valle said that the agitation and violence she experienced may be a symptom of the divisions the country is experiencing, but that "violence is never the answer."

"I believe strongly in non-violence. I believe in peaceful protests. I believe in my right to carry a sign. I am a 23-year-old woman with only the intention to hold a sign," she said. "So, I had no -- no bad intentions, only wanted to be there like everyone else with a sign."

Valle said she suffered a concussion in the scuffle but was feeling better Wednesday.

Profitt was fired by the Paul campaign and later apologized for the incident - but not for his behavior and not to Valle - saying, "I'm sorry it came to that and I apologize if it appeared overly forceful, but I was concerned about Rand's safety."

He was dropped from a campaign and it is now up to a judge to decide whether to press criminal charges.