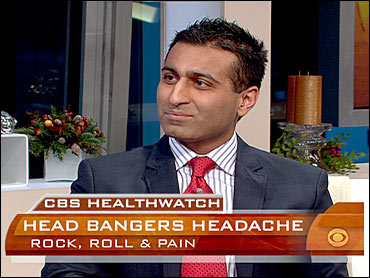 "Head-banging" to heavy metal music could be hazardous to your health, researchers in Australia have concluded.

They found that it can give you more than a headache: It can injure your brain and neck.

On The Early Show Thursday, Dr. Sheeraz Qureshi, an orthopedic surgeon at Mount Sinai Hospital in New York, observed that, "The way head-banging was originally described, it was actually people banging their heads against the stage. And certainly you would imagine that that could be a cause of some head and neck injuries."

The more common notion of head-banging, which resembles forceful shaking of the head in the "yes" motion, is risky, Qureshi said.

"I guess if you're not a head-banging purist and you're not banging your head against the stage and you're doing what the guys in 'Wayne's World' are doing, certainly, with those extremes of motions, there have been some reports of fractures and other injuries, even traumatic brain injuries just from head-banging."

The researchers in Australia attended rock concerts and an found increasing risk of neck injury beginning at tempos of 130 beats per minute, related to the range of motion in the head-banging style. The authors suggest head-banging may cause headaches and dizziness if the range of movement of the head and neck is more than 75 degrees either way from a strictly vertical position of the head.

"An extreme in the range of motion," Qureshi pointed out, "certainly doing that violently and jerking your head back and forth" could cause problems.

Experts note that there have been anecdotal reports of head-banging induced injuries that include hearing loss, stroke and mild traumatic brain injury -- there's little formal research into head banging.