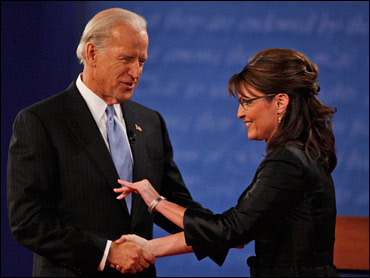 Not everything Joe Biden and Sarah Palin said during the vice presidential debate was conveyed in words. Body language counts, too.

On The Early Show Thursday, body language and political imagery expert Joe Navarro, author of "What Every Body Is Saying" and a former FBI criminal profiler, offered his observations of the candidates' non-verbal communications during their face-off.

"I thought they did really well," Navarro told co-anchor Harry Smith, "you know, so much different than the presidential debate we just saw, where you saw a lot of tension, you saw a lot of distancing between the major players. Here ... they shook hands very closely. They deliberated for quite a bit of time. And there was a significant difference in how they cease addressed each other: They faced each other.

Asked by Smith if Palin seemed more aggressive in terms of how she addressed Biden, Navarro responded, "I think she had an agenda of things she had to get out verbally. And so, you know, she was trying to get that message out. Aggression? I don't think she was as aggressive as some people thought she might be."

Biden, said Navarro, "looked very confident. He looked very attentive to details. He was -- it was a great performance. We've seen him before Congress before and he's always very dynamic, and he held to very short statements, so it was -- somebody got a hold of him! But we listened time to him, because he changed his (sometimes longwinded) manner."

"On the other side of the coin," Smith remarked, "there was a very low bar for Sarah Palin to get over. There was a lot of curiosity how she would do. She didn't so well in some of these interviews the last week or two. What'd she do last night?"

"She did remarkably well," Navarro replied, "and I'll tell you why. Because there was a national/international audience. There was so much pressure on her. Joe Biden is a tough person to go up against and she held up extremely well."

"There was a lot of sort of nervous smiling last night," Smith said.

What did Biden's smile tell Navarro?

"We use that nervous smile to shield us when we're under a little bit of stress and so forth. Everybody does it, and some people hold it longer than others, but it's very useful for that."

Smith said, "The pundits graded it as a draw. But on the overnight polling, it tended to favor Biden by a significant margin. Why would that have been?"

"One of the things we look for is comfort and discomfort," Navarro explained. "He made us feel comfortable. He looked presidential. She looked mayoral."