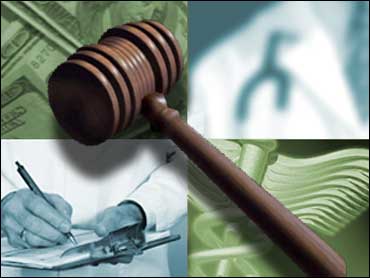 The settlement, which requires formal approval by the Justice Department and the courts, would raise the amount of civil fines and criminal penalties the Nashville-based company has paid the government to $1.7 billion over the past few years.

In the cases included in the settlement agreement, whistle-blowers alleged the company filed false claims and paid kickbacks to doctors so they would refer Medicare and Medicaid patients to its facilities.

James Thompson, a Texas doctor who filed a whistle-blower suit in 1995, said Wednesday "we are nearing the end of a long, long road. I am proud of what I did, and I'd do it again. But I'm sure glad it's over."

Thompson said the case cost him his health and his practice. He said other doctors ostracized him and wouldn't share on-call duties for his patients so he practiced alone without a day off for three years, suffering a stroke in 1998.

"I said it then, and I'll say it again, doctors have a duty to protect the health of the community.They protect their patients first, and profits last," Thompson said.

But the attorneys representing other whistle-blowers aren't ready to sign off on the settlement.

"We have a statutory right and obligation to ensure the settlement is fair, adequate and reasonable," said John R. Phillips of Phillips & Cohen LLP, which represented the whistle-blowers in the cost-report case. "Once we have more information, we intend to fully analyze the settlement."

The firm represents James Alderson, former chief financial officer of a Montana hospital run by a company once owned by HCA. He says he was fired for failing to include aggressive claims on a cost report and filed suit in 1993 charging fraud.

Under the settlement agreement, HCA would pay the Justice Department $631 million beginning Feb. 3, at an interest rate of 4.5 percent, and the government would end its investigation.

Previously, HCA agreed to pay $250 million to resolve non-related outstanding Medicare cost report issues with the Centers for Medicare and Medicaid Services. The company paid $840 million in 2001 to settle other whistle-blower cases and pay criminal fines.

In 1999, two former HCA executives — Jay Jarrell and Robert Whiteside — were convicted of conspiring to defraud the government and making false statements in Medicare reimbursement cost reports for a hospital in Port Charlotte, Fla. The convictions were overturned this year on appeal. It was the only case that went to trial.

The Justice Department closed its criminal investigation of HCA executives in July, clearing them to testify in the civil Medicare and Medicaid fraud cases.

The company also said Wednesday it has reached an agreement with attorneys representing states with claims similar to the government's. Under this agreement, HCA will pay $17.5 million to state Medicaid agencies.

HCA expects to charge approximately $395 million against earnings after taxes in the fourth quarter of 2002 because of the settlements. The net after-tax cash effect on HCA is estimated at approximately $445 million.

The company also will be obligated by law to pay legal fees of the whistle-blowers' attorneys. The company expects to record a charge for these fees in the fourth quarter of 2002.

"We are pleased to have successfully negotiated a settlement to the remaining two civil issues," said Jack O. Bovender, Jr., HCA chairman and CEO.

"Today, we are a stronger company with a corporate integrity agreement, a corporate compliance initiative that has set the standard for many in our industry and a culture that is focused on the delivery of quality patient care in the communities we serve," Bovender said.

Justice Department spokesman Charles Miller issued a statement saying "we have had discussions with HCA about resolving this civil litigation. The staff assigned to this matter has now reached a tentative understanding with HCA for a settlement."

Wall Street liked the news, which caused HCA stock prices to surge $1.47 to $42.98 per share in heavy trading by midday on the New York Stock Exchange.

Analyst Sheryl Skolnick of Fulcrum Global Partners LLC, who was one of the company's harshest critics during the investigation, changed her rating from "neutral" to "buy" on Wednesday.

"This is very, very good news. To some extent we all anticipated something by the end of the year and were disappointed this fall by some people in Congress who said the company was not paying enough," she said. "I don't care how much they pay, as long as they get rid of the issue."