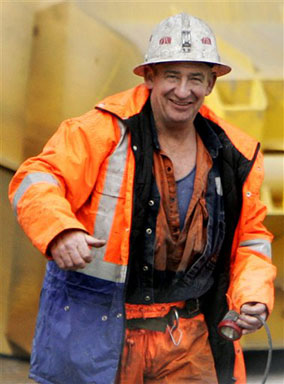 Expansion hockey is no fun. Just ask the Atlanta Thrashers.

Playing an inspired game after a closed-door meeting the night before, Atlanta fired 41 shots at Chicago goalie Jocelyn Thibault. But he stopped 38 of them and the Blackhawks held on for a 4-3 victory Saturday night.

The Thrashers have gone 13 games without a victory, giving them the NHL's worst record (11-42-6).

"When you start to slide like we are, it gets harder and harder to dig out of it" said Mike Stapleton, who scored for the Thrashers in his first game back from the injured list. "Is it hard to stay positive? Yeah, there's no question about it. But we have to do it."

Kevin Dean, who began the season in Atlanta, banged in a second-chance rebound with nine seconds left in the second period, putting the Blackhawks ahead to stay. Dean McAmmond, Tony Amonte and Steve Sullivan also scored for Chicago, and Michael Nylander added three assists.

"I think our skill level showed tonight," coach Lorne Molleken said. "Our guys did a good job of being creative. But Atlanta is a team that works extremely hard. They had opportunities to win the hockey game, too."

Following a 3-0 loss to San Jose on Friday, Atlanta's players and coaches held an impromptu, 20-minute meeting in the locker room to discuss their woes. The team responded with a much more competitive game, snapping a five-period scoreless stretch and twice rebounding from one-goal deficits.

But the result was the same: another loss for the NHL's newest team, which is 0-11-2 since its last victory on Jan. 14.

"They worked hard," Nylander said. "But our goalie played great."

Thibault stopped 17 of 18 shots in the final period, finallgiving up a goal to Yannick Tremblay with 31 seconds left. But the Thrashers couldn't force overtime with an extra attacker on the ice.

"Instead of talking about 13 or whatever the number is, let's look at the 41 shots," coach Curt Fraser said. "Our guys kept battling and if you play like that every game, good things are going to happen."

McAmmond's 12th goal provided the only scoring of the first period at 13:28, but the teams combined for four goals in a back-and-forth second.

Dean, who was traded from the Thrashers to Dallas in December and moved on to Chicago in another deal Tuesday, broke a 2-2 tie during a scramble in front of the net as the clock was winding down.

His initial shot from the right faceoff circle was stopped by Thrashers goalie Norm Maracle. Dean got another chance, but that shot deflected off a group of players in front. The puck landed on his stick a third time and he banked in the shot off the far post for his second goal of the season.

"Look at the extra effort tonight, the second and third effort," Fraser said. "Unfortunately, that third goal hurt us bad."

Atlanta's Johan Garpenlov tied it 1-1 at 6:44 of the second, directing the puck into an open net off a cross-ice pass from Kelly Buchberger. Tony Amonte put the Blackhawks back ahead with his team-high 24th goal, a blast from the center of the left faceoff circle at 9:25.

Stapleton deflected a shot from the blue line past Thibault for a power-play goal at 11:30, evening the score once again.

In the third, Sullivan's 10th goal at 12:53 proved to be valuable when Tremblay scored in the frantic final minute.

Hnat Domenichelli, acquired in a trade with Calgary on Friday, couldn't play his first game for the Thrashers. The forward must obtain a visa to work in the United States, but it takes two business days for the government to process the claim.

The Thrashers hope Domenichelli will be able to play Tuesday night in St. Louis.