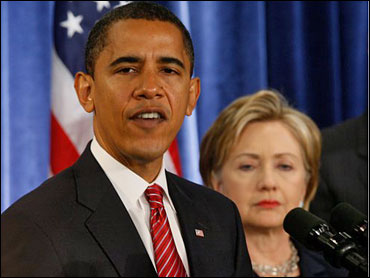 This column was written by Barron YoungSmith.

When news first leaked that Hillary Clinton was being considered for secretary of state, some of the most vocal responses came from the right--and they weren't exactly negative. Newt Gingrich told Fox News that she would be "a very formidable secretary of state, and frankly, a lot tougher in defending American interests than some of the liberal secretaries of state we've had in the past." Republican Senator Jon Kyl lavished her with praise, calling her "a very good selection." The Weekly Standard gushed that she had become "The Great Right Hope."

What's with the right's newfound love for Clinton? I spoke with a number of conservative foreign-policy eminences to find out. Many of them were surprisingly optimistic about Obama's new top diplomat. "On the whole I'm quite pleased," explains Richard Perle, former chairman of the Defense Policy Board and an architect of the Iraq war. "She seems to me quite tough-minded. That's not a worldview, but it is a predisposition. That's a good thing. It's not an easy world out there."

Perle says he would rather have a hawkish Democrat than a Chuck Hagel-style Republican as a token bi-partisan appointment. "I heard about others on the list [for secretary of state] that I wouldn't be happy about," he says. "Those were mostly Republicans."

Indeed, Perle muses, Obama's new cabinet may be an improvement on Bush's. "Bush suffered from a State department and CIA who never liked his policies. State ignored him and the CIA actively undermined him," he says. "I think Hillary can potentially deal with that. I think she can get the State department to do what she and the president want it to do. That has not been true of Condi."

Perle predicts that Clinton will likely perpetuate the foreign policy approaches that have typified Bush's second term, when the president pursued goals such as tighter sanctions on Iran. "I'm relieved," he says. "There's not going to be as much change as we were led to believe. I think she's very much in the mainstream. By now, I think the Bush foreign policy is, as a practical matter, the same policy as the policy of the Department of State--which is what I'd expect it to be under Hillary Clinton. Contrary to expectations, I don't think we would see a lot of change."

George Shultz, Ronald Reagan's secretary of state, also lauds the Clinton appointment. "I think she could be a very good secretary of state," he says. "She is well-informed, she's got lots of energy--intellectual energy and physical energy--to do the job. She's curious. She reads. She works very hard. She can listen. And she's known around the world, so she has standing. All those things would stand her in good stead."

Shultz's major concern is not with her abilities or positions, but rather the dynamic between the two former nemeses. "The key is her relationship with the president. That has to be close," he says. "It has to be very clear that they're close, and it has to be clear to all the people she's dealing with that there is no daylight between her and the president, otherwise the whole thing falls down."

Shultz downplays the importance of major policy differences between Obama and Clinton. "It always seems to me that your first criterion has to be high competence," he says. "And obviously you want someone who is, philosophically and politically, reasonably in tune with you. But when you sacrifice the former for the latter, you get in trouble."

He also thinks that Obama is a strong enough leader to set the policy agenda for his administration. "In the end, he's the one who will have to decide," Shultz says. "And she's the one who has to recognize that he's the one who got elected. When you win an election, that's what happens."

But not all conservatives are breaking out the champagne for a Secretary of State Clinton. George W. Bush's former UN ambassador, John Bolton, is less enthusiastic than many of his colleagues, saying that the appointment raises more questions than answers. "The idea that he'd bring Hillary Clinton in as secretary of state completely confuses me," he says. "The basis of his nomination was his opposition to our presence in Iraq, and his principal competitor--at least until she lost the nomination--supported the overthrow of Saddam."

Beyond their disagreements on Iraq, Bolton points to concrete policy differences between Obama and Clinton. "I don't know how he can get to this from some of the positions he took during campaign," he says. "Take the contrast on Iran. How do you bridge those differences? Is she going to implement his policy of negotiating with [Ahmadinejad]? ... Will the policy be something halfway in between? Will it be something else?"

The committed Reaganaut reminds us that just because Clinton differs from Obama doesn't mean he supports her policies either. "I didn't like the Clinton administration, so to the extent that we're 'merely' reverting to the Clinton policy, I don't think that's good," he says. "But that would be very different from what [Obama] advocated during the campaign."

Bolton suggests that perhaps Obama is appointing someone with such a different worldview in order to "keep all his options open." But at the end of the day, he's not convinced the two will diverge dramatically. "I knew her in law school--the two Clintons were the year ahead of me," Bolton says. "If you go back to what I saw as her formative principles while she was in law school, then she's very consistent with early Obama campaign."
By Barron YoungSmith
Reprinted with permission from The New Republic

James Carville on "wokeness" and Democrats
Thanks for reading CBS NEWS.
Create your free account or log in
for more features.
View CBS News In
CBS News App Open
Chrome Safari Continue
Be the first to know
Get browser notifications for breaking news, live events, and exclusive reporting.