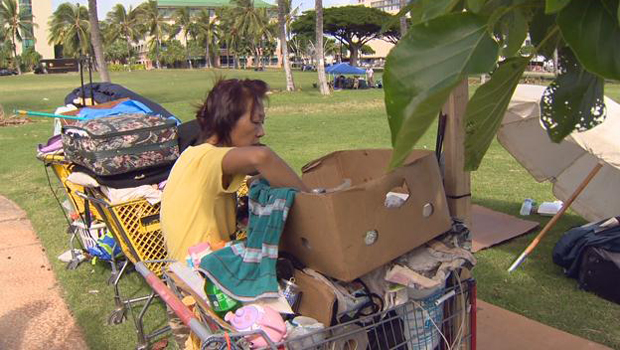 HONOLULU -- It's not uncommon for the governor of Hawaii to declare a state of emergency, but the one the governor declared recently was a little different.

The cause wasn't a natural disaster but rather because the state's homeless problem grew out of control.

"As you can see, things look about as perfect as paradise can be," Honolulu mayor Kirk Caldwell told CBS News.

But just down the street is Hawaii's crisis of homelessness.

"People want to come to paradise and they get here with a job but they find it's really hard to live here," Caldwell said. "Buying a home is super expensive, renting a place is very, very expensive."

Many end up on the streets, on beaches, in parks, and in tent cities. There are now more than 7,000 homeless in Hawaii -- the highest per capita rate in the nation.

About 5,000 of those are packed into Honolulu. Many struggle with drugs, alcohol and mental illness.

Caldwell says the city is making progress. About 500 homeless were moved into housing over the past year.

But recently the number of homeless families has been soaring. A family of six lives in a van in the parking lot of St. Elizabeth's Episcopal Church in Honolulu.

"My kids, they don't have space at night to study their lessons, do their homework," the mother of the family said. "They study under the street light."

Onena, who did not want her face on camera, says her husband works full-time at a high-end restaurant for minimum wage -- but not nearly enough to pay rent here.

"They've done everything right -- they struggle, they work -- and there is no housing," said Father David Gierlach, who helps the family survive.

"It is a government problem and more got need to step up and help fix it," Gierlach said.

Gierlach said he'd like to see a homeless encampment in the heart of Waikiki. He says that would force the powerful tourism industry and the politicians to do more for the homeless.

Afghanistan's economy on the brink of collapse
Chip Reid