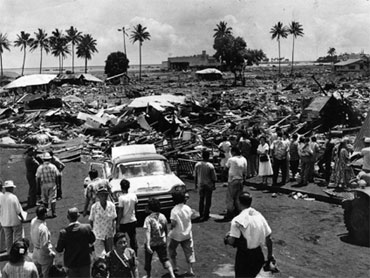 This morning's 8.8 magnitude earthquake in central Chile was the largest recorded in the Pacific region in nearly fifty years.

On May 22, 1960, a 9.5 earthquake - the largest ever recorded - hit southwest Chile, generating a tsunami that struck the Hawaiian Island in about 15 hours.

Hilo Bay area on island of Hawaii was hit hard by the 35-foot wave, which destroyed or damaged more than 500 homes and businesses. Sixty-one people died. Damage was estimated at $75 million.

This tsunami caused little damage elsewhere in the islands, where wave heights were in the 3-17 foot range.

The tsunami also struck Japan, where 138 people died, and the Philippines, where 32 people were dead or missing.

In Chile approximately 1,655 people were killed and 3,000 injured in the quake. Two million people were made homeless, and damage was estimated at $550 million.

The earliest description of a tsunami-type wave comes from the northern part of the Aegean Sea in 479 B.C. Many historians believe the explosive eruption of Santorini in the Aegean Sea in 1500 B.C. caused a tsunami that brought widespread devastation to the eastern Mediterranean and Crete.

Other notable modern-era tsunamis have included:

1755: Thousands of coastal residents in Spain, Portugal and North Africa were killed by waves spawned by an earthquake at Lisbon.

Aug. 27, 1883: More than 36,000 people were killed by tsunamis following the explosion of the volcano Krakatau in the Sunda Strait near Java. Some estimates of the number killed in that disaster were even higher. Waves estimated as high as 90 feet slammed ashore on nearby islands, wiping out coastal communities in what is now Indonesia.

April 2, 1868: A locally generated tsunami swept over the tops of palm trees and claimed 81 lives in Hawaii.

Jan. 31, 1906: A strong tsunami struck the coast of Ecuador and Colombia, submerging half of Tumaco, Colombia, and washing away half of a nearby island. The death toll has been estimated at between 500 and 1,500.

April 1, 1946: A Pacific-wide tsunami was generated by a magnitude 7.8 earthquake near Unimak Island in Alaska's Aleutian Island chain. A huge wave destroyed the U.S. Coast Guard's Scotch Cap lighthouse on Unimak, killing all five of its occupants. The lighthouse was a steel-reinforced concrete structure standing about 90 feet above sea level.

As a result of this wave, two years later the United States established a Pacific Tsunami Warning Center in Hawaii.

Nov. 4, 1952: A strong earthquake off the coast of Russia's Kamchatka Peninsula generated a great, destructive Pacific-wide tsunami. Its waves struck the Kamchatka Peninsula, the Kuril Islands and other areas of Russia's Far East, causing considerable damage and loss of life. There was also damage in Hawaii, Peru and Chile.

March 28, 1964: A magnitude 8.4 quake in Alaska generated tsunamis that caused damage in southeastern Alaska, in Vancouver Island, British Columbia, and in the states of Washington, California and Hawaii. More than 120 died. Hardest hit was Crescent City, California, where waves reaching as much as 20 feet destroyed half of the waterfront business district. Eleven people lost their lives there. There was extensive damage in San Francisco Bay and at the marinas in Marin County and at the Noyo, Los Angeles and Long Beach harbors.

December 26, 2004: A catastrophic earthquake off the west coast of Sumatra, Indonesia (with a magnitude of between 9.1 and 9.3) generated tsunami waves of up to 100 feet that swept across the Indian Ocean, killing nearly 230,000 people in 14countries.