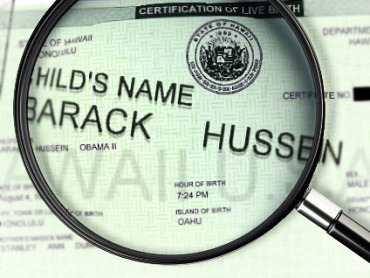 The state gets about 50 requests per month for the president's birth certificate from the so-called "birthers," according to the Honolulu Advertiser. Department of Health Director Dr. Chiyome Fukino reportedly said in February that the requests largely come from the same four to six people.

Birthers believe, contrary to overwhelming evidence, that Mr. Obama may not have been born in the United States and is thus not eligible for the presidency.

"The time and state resources it takes to respond to these often convoluted inquiries are considerable," testified Fukino, who has repeatedly stated that she has seen the president's vital records showing that he was born in the United States.

While the law is relatively broad - it allows all state government agencies to ignore duplicate or very similar requests - it appears to have been crafted specifically to deal with requests from birthers.

State Sen. Will Espero told the Advertiser the new law will help, though the problem isn't going away.

"It will certainly provide some relief and help that Department of Health staff [needs], although I don't think it will by any means put an end to the birther issue," he told the newspaper. "There are people out there, and mostly from the Mainland, who are just rabid about this and I don't think anything we provide or give them will convince them otherwise."