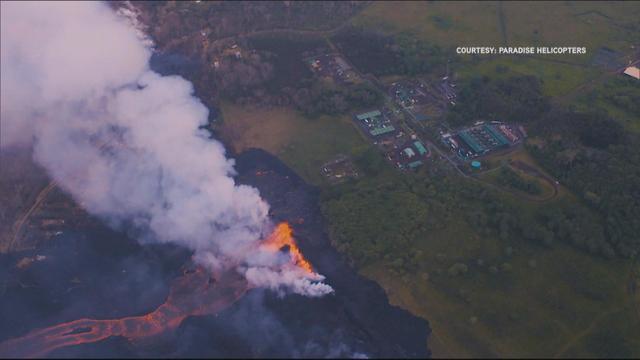 Emergency workers in Hawaii are racing to protect a geothermal power plant near the Kilauea Volcano. Slow-moving molten rock entered the site and is just a few hundred yards from the wells. There is concern lava could trigger the release of deadly hydrogen sulfide gas, reports CBS News' Mark Strassmann.

Lava continued its steady advance toward the Puna Geothermal Venture Plant before stalling late Monday. The facility is shut down, but the wells there still present a risk if overrun with the molten rock.

Flammable liquids have already been removed and the wells have been filled with cold water, but won't be plugged until today. A worst-case scenario could be catastrophic.

Meanwhile lava continued to burst from the area's active fissures Monday. Not one but two flows of lava now pour into the Pacific Ocean. Their three-mile journey over land left behind lava mounds that in some cases tower 20 feet high and shut down highways.

Hundreds of evacuees have been forced from their homes for nearly three weeks. Families support each other in a makeshift relief center, offering hot meals and donated clothes. Heath Dalton's house burned down last week. He's frustrated officials made him leave days earlier, before he could remove any of his family's belongings.

Along with all the molten rock, fissures also pump out toxic gases including sulfur dioxide. Shifting winds are a worry and sightseeing residents have been urged to stay away.