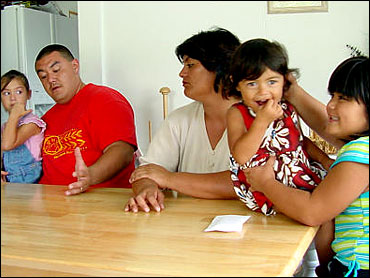 Hungry children sat quietly in a darkened living room, terrified of their abusive father. In the kitchen, maggots and rotting food filled the fridge. With the electricity out, cooking was done on a propane stove. The furniture was repossessed. The welfare check was already spent. The family was being evicted.

None of this mattered to Wayne and Dina Tamura.

As long as the couple from the tiny town of Kau was high on crystal methamphetamine, they were happy.

"I didn't think about the kids, I didn't want to spend money on diapers," said Wayne Tamura, now a recovering addict. "All I wanted to do was smoke."

On the streets, it's known as "ice" - the highly pure, crystalline form of methamphetamine whose use across the Hawaiian Islands has reached epidemic levels. The state's drug-fighting efforts culminate Monday when Lt. Gov. James "Duke" Aiona convenes a statewide drug summit to discuss ways to beat back the menace.

"It's just an insidious drug," said Aiona, a former prosecutor and judge. "I've never seen the devastation from the other drugs like this."

Smoking it provides a high so intense and long-lasting that addiction can be instant, withdrawal is excruciating and brain damage often permanent.

Since the drug's introduction from Asia in the mid-1980s, ice has burrowed into every community in Hawaii, becoming widely used and readily available. The drug threatens the very way of life in these multicultural islands, where close-knit families often live three generations to a household, officials say.

Every level of government in Hawaii is focused on stopping the drug. Lawmakers took the rare step of creating a joint House-Senate committee to formulate an attack plan. Special police units are being established, and communities are holding town-hall-style meetings and anti-drug rallies.

Most of the ice in Hawaii is produced in Mexico and California, according to federal authorities. While meth in other states is often manufactured locally and usually snorted, ingested or injected, Hawaii prefers the imported, smokable crystal meth or "ice," which is higher in purity.

"It takes your soul away," said Joshua Lagmay, 26, a recovering user who recalled how the drug made him prostitute himself and terrorize his community, even his own family.

Though virtually every state has a meth problem, and the smokable form has become established in other pockets of the country, including California, officials in Hawaii have been calling the islands' problem the worst anywhere.

Some 37.4 percent of men jailed in Honolulu tested positive for methamphetamine in 2001, higher than any other major U.S. city, the federal government says.

The Honolulu Medical Examiner's Office reported that on the island of Oahu, deaths where ice was a principal cause quadrupled in the past decade to 62 last year, surpassing deaths related to any other illegal drug or alcohol.

"If we don't grab a hold of this moment in time, we're going to lose a lot more lives before things get better," said Edward Kubo Jr., the U.S. attorney for Hawaii.

"Clearly, Hawaii is being killed," Kubo said. "We're on our knees right now."

There's no precise count of Hawaii's ice users. Estimates range from 8,000 to 120,000 out of a state population of 1.2 million, mainly because officials say its hard to get credible information from users and recovering addicts.

Officials say the state was a ripe target for ice dealers because of the rural surroundings and no major organized crime group controlling the drug trade.

Police across the state blame ice for a surge in property crimes, domestic violence and psychotic behavior. Said Sue Cuffe-Sykos, a drug counselor in the small town of Hana: "It's the first time I've seen fear. ... People are afraid of their own relatives."

For the Tamuras, addiction quickly mounted into a $500-a-day habit, leaving them broke and unemployable. They would stay high and awake for more than a week at a time, and Wayne Tamura became aggressive and paranoid to the point of hallucinating.

"After you stay up for days, it's mean how the brain plays tricks on you," he said.

It wasn't until the state took custody of their children for a third time that the couple decided to get treatment.

As recovering addicts, the Tamuras find the allure of the drug is still there. And while that feeling may never vanish completely, with help they are trying to rebuild their lives and be reunited with their five children.

"I'm in love with him again," Dina Tamura said of her husband. "He has changed so much. He's like a man again - a husband and father."

He is, to her, everything that ice had taken away.