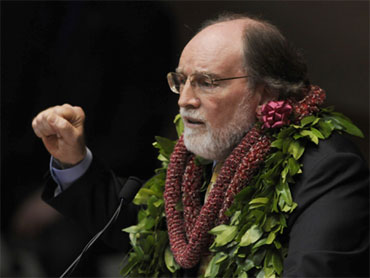 The reason for Palafox's resignation was a mystery, and he wouldn't say whether he was asked to resign.

"Gov. Abercrombie accepted Dr. Palafox's request and will make a new appointment for the Health Director as soon as possible," spokeswoman Donalyn Dela Cruz said in a statement.

The Attorney General's office wouldn't comment on whether it's investigating Palafox, said Joshua Wisch, special assistant to the attorney general.

Palafox, 58, said he was surprised when he heard TV news reports citing anonymous sources claiming he was under investigation for medical billing fraud.

"I get handed these e-mails about investigations and so forth, but I have no clue. I'm lost," Palafox said.

University of Hawaii John A. Burns School of Medicine Dean Jerris Hedges said the school is unaware of any pending investigation. Hedges said Palafox will return to his job at the school, where he was chairman of the Department of Family Medicine before his nomination.

The state Department of Commerce and Consumer Affairs said it had no complaints about Palafox over the last five years.

No criminal cases named Palafox in a search of federal and state court records.

Sen. Clayton Hee, who has overseen many confirmation hearings, said he suspected that the Abercrombie administration's review of Palafox's background overlooked key information.

"An issue has arisen, probably having to do with personal reasons, and that suggests to me that the vetting process wasn't as complete as it should have been," said Hee, D-Kahuku-Kaneohe, chairman of the Judiciary Committee.

"Sen. Inouye and his staff stand ready to assist Gov. Abercrombie and his administration in whatever way possible," said Inouye spokesman Peter Boylan.

Palafox served on the active medical staff at Wahaiwa General Hospital, and he previously was medical director for the Republic of the Marshall Islands.