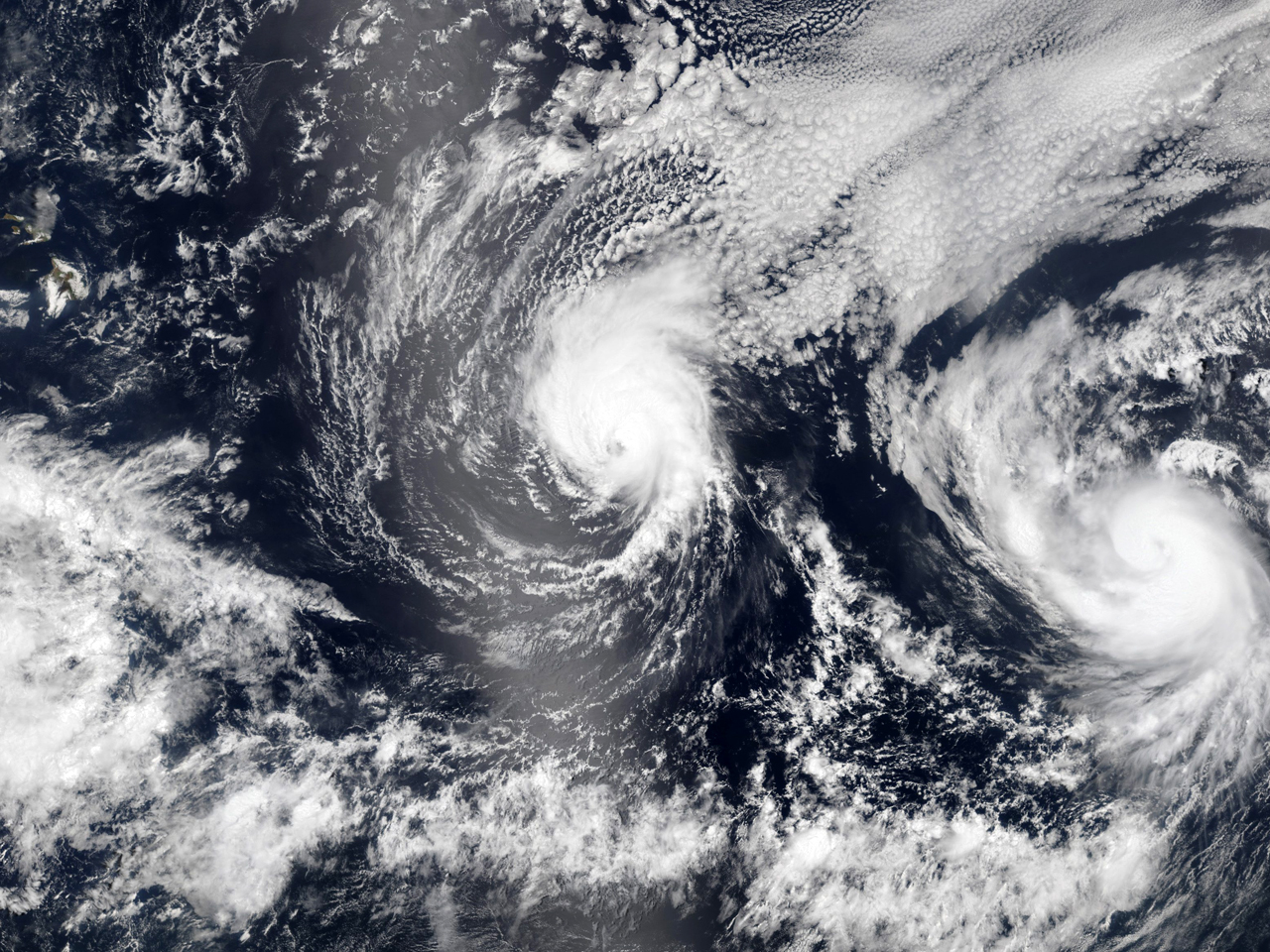 HONOLULU -- Iselle was supposed to weaken as it slowly trudged west across the Pacific. It didn't - and now Hawaii is poised to take its first direct hurricane hit in 22 years. Tracking close behind it was Hurricane Julio, which strengthened early Thursday into a Category 2 storm.

As the two hurricanes churned toward the islands, a magnitude-4.5 earthquake hit Hawaii's Big Island at about 6:30 a.m. local time, the U.S. Geological Survey reported.

The temblor struck on the island's north tip, about 7 miles from Waimea. There were no immediate reports of damage.

Kelsey Walker said the quake felt like a "little jolt" but didn't knock things off shelves at the Waimea grocery store where he works. He was trying to keep a sense of humor about it.

"We have a hurricane. Now we have this on top of it. What else?" said Walker, second assistant manager at Foodland Waimea.

Meanwhile, state officials were assuring the islands were ready for the storms and people should prepare but not panic. At a morning press conference, Gov. Neil Abercrombie stressed that the state is prepared.

"We are fully prepared today as it's possible for us to be, institutionally," he said.

Travelers got their first word of disrupted flights Thursday, when commuter airline Island Air said it was canceling some afternoon flights between the islands and shutting down all operations Friday.

The state Department of Transportation said that no airports were closed and that officials won't decide whether to close them until the storm gets closer.

Hurricane Iselle was expected to arrive on the Big Island on Thursday evening, bringing heavy rains, winds gusting up to 85 mph and flooding in some areas.

Tom Evans, acting director of the Central Pacific Hurricane Center in Honolulu, told CBS News that the Big Island should start feeling the effects of Iselle around 4 p.m. in Hawaii (10 p.m. ET), but the storm wasn't expected to make landfall until around 8 p.m.

At the White House, President Obama was briefed by his homeland security adviser on preparations for the storms that are threatening his birthplace. Spokesman Josh Earnest said administration officials will remain in close contact with the Federal Emergency Management Agency and other agencies that are preparing to help with response and recovery efforts as the storms near.

Some parts of the islands may see as much as a foot of rainfall by Friday, which could bring power outages, flash floods and landslides, CBS News correspondent Bigad Shaban reports from Hilo, Hawaii.

That has emergency management officials worried. On Wednesday, they discussed what back-to-back hurricanes could mean for these islands, more than 2,400 miles away from the U.S. mainland.

"There's a limited amount of food on island at any one time - majority of the food is barged in," Barney Sheffield, a disaster coordinator for the American Red Cross, told CBS News.

He said the storms could shut down Hawaii's shipping ports and cut off access to remote communities.

"We're as prepared as you can be, but you never know what's going to come down," Sheffield said.

That uncertainty turned to horror more than 30 years ago, when Hurricane Iwa, a Category 1 storm, left Hawaii with $250 million in damage.

Weather officials changed their outlook on the system Wednesday after seeing it get a little stronger, giving it enough oomph to stay a hurricane as it reaches landfall.

"What ended up happening is the storm has resurged just enough to keep its hurricane strength," said Mike Cantin, a National Weather Service meteorologist.

Cantin said that means stronger winds of 60 to 70 mph, though rainfall estimates of 5 inches to 8 inches in a short time frame remained unchanged.

"Not a major hurricane, but definitely enough to blow things around," he said.

Iselle loomed about 195 miles east of Hilo late Thursday morning, with sustained winds of 75 mph and traveling about 16 mph.

Cantin said the Big Island's size and terrain would help break up the hurricane, weakening it into a tropical storm as it passes Maui and Oahu late Thursday and early Friday.

Hurricane Julio, meanwhile, swirled closely behind with maximum winds whipping at 105 mph. The National Hurricane Center said it expected the storm to strengthen even more Thursday before gradually weakening by Thursday night. That weakening is expected to continue into the weekend.

Hawaii has been directly hit by hurricanes only three times since 1950, though the region has had 147 tropical cyclones over that time. The last time Hawaii was hit with a tropical storm or hurricane was in 1992, when Hurricane Iniki killed six people and destroyed more than 1,400 homes in Kauai, said meteorologist Eric Lau.

The two hurricanes have disrupted tourism, prompted flash flood warnings and led to school closures. Abercrombie, meanwhile, signed an emergency proclamation allowing officials to tap into a disaster fund set aside by the state Legislature.

Also Thursday, the American Red Cross pleaded for the return of its only emergency truck on the Big Island. Hawaii chapter CEO Coralie Matayoshi said the white Ford F-150 truck bearing Red Cross markings was stolen in Hilo Wednesday night. The organization will have to borrow or rent a truck as Iselle approaches the island.

Bruce Kim, executive director of the state Office of Consumer Protection, told reporters that the agency was looking into reports it's received of price-gouging. Kim said those reports will be investigated and prosecuted to fullest extent of the law. Kim said the office also heard anecdotally that some merchants had lowered prices for the storm.

Hawaiian Airlines waived reservation change fees and fare differences for passengers who needed to alter travel plans Thursday and Friday because of the storms. Hawaiian Airlines spokeswoman Ann Botticelli said hundreds of inquires poured in from customers seeking to change their flights.

Boston resident Jonathan Yorke and his wife booked a Hawaii vacation with their two daughters last year. He has been watching the news to see how the storms could affect the two-week trip to Maui and the Big Island.

"We're all optimists, so we'll make the best of it," Yorke said.

Washington state couple Tracy Black and Chris Kreifels made plans to get married in an outdoor ceremony on the Big Island Saturday. They spent Wednesday getting a marriage license, adjusting plans and communicating with worried guests on the mainland.

"We see the rain as a blessing," Black said. "It will work out as it's supposed to."

It wasn't immediately clear what financial impact the storms would have on the state's tourism industry, a key economic driver.

Hawaii residents also have had to adjust. Stores have seen long lines this week as people brace themselves.

Some are voting early in primary elections that close Saturday. The elections include several marquee races, including congressional and gubernatorial races. Abercrombie is running for re-election in a tight Democratic primary.

The storms are rare but not unexpected in years with a developing El Nino, a change in ocean temperature that affects weather around the world.

Ahead of this year's hurricane season, weather officials warned that the wide swath of the Pacific Ocean that includes Hawaii could see four to seven tropical cyclones this year.

Testimony concludes in civil trial between Johnny Depp and Amber Heard
Thanks for reading CBS NEWS.
Create your free account or log in
for more features.
View CBS News In
CBS News App Open
Chrome Safari Continue
Be the first to know
Get browser notifications for breaking news, live events, and exclusive reporting.