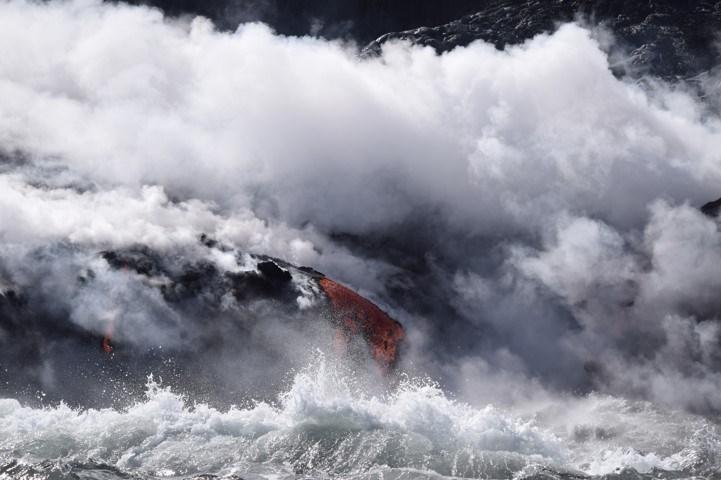 VOLCANO, Hawaii -- The National Park Service has created a new lava viewing area on the Big Island after a large section of lava crumbled into the ocean on New Year’s Eve.

“Those 40-foot waves that were generated from the breakoff started to erode the coastal cliff section, so a lot of the coast cliff area that was out there, the former viewing area, all of that fell into the ocean. It’s a very, very dangerous situation out there,” said Jessica Ferracane, public affairs specialist for Hawaii Volcanoes National Park.

The Kamokuna ocean entry within the park is currently off-limits to hikers, but the lava flow can be seen from tour boats.

The park said Monday that no one was injured in the Saturday collapse, which sent showers of volcanic rock into the air. But there were some close calls: five visitors ran out to the coastal cliffs despite the closure, and rangers chased after them and forced them to turn back. Within 15 minutes, the area they had been standing on fell into the ocean.

Lava deltas are formed when lava enters the ocean and builds new land on loose and unstable substrate. In addition to the potential for collapse, such areas are dangerous because they can create a corrosive plume of hydrochloric acid and volcanic particles.

“It’s a very, very dangerous situation out there,” she said.

During the collapse, the lava viewing area was closed. But despite that, five visitors ran out to the coastal cliffs. Rangers chased after them and forced them to turn back. Within 15 minutes, the section of cliff where they were standing crashed into the ocean.

“When the rocks fell, it created some very substantial waves. The water actually reached the top of that cliff from the waves. Then people started to panic,” said California visitor Brooks Taylor.

“There’s a really fast-moving river of lava flowing out of the ruptured lava tube into the sea, creating a new delta,” said Warren Fintz, owner of Eppix Adventures Photography.

Lava deltas are formed when lava enters the ocean and builds new land on loose and unstable substrate. In addition to potentially collapsing, it can produce a highly corrosive plume of hydrochloric acid and volcanic particles that could be detrimental to the health.