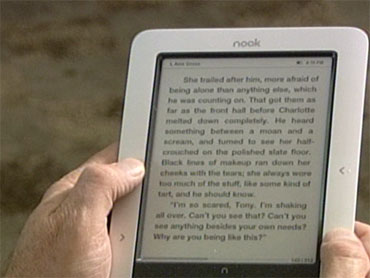 The era of the physical "book" may be ending.

This holiday season, Amazon.com says its E-reader, the Kindle, was its most-gifted item ever. And on Christmas Day, according to Amazon.com, E-books actually outsold physical books on the site.

Craig Berman, vice president of global communications at Amazon.com, said, "The best-selling, most wished for, most gifted product across the millions of products we have on Amazon is Amazon Kindle, our wireless e-reader."

One Nook owner told CBS News, "Through the wireless feature on the Nook, you can download the book, and it takes just a few minutes, and then your book is in your library. And you can start reading it immediately."

But it's not just books, Sieberg noted. The struggling newspaper and magazine industries, he said, are also hoping to turn the page and cash in.

Randy Bennett, of the Newspaper Association of America, told CBS News, "It may not be a mass market product tomorrow, but I think there is a segment that will want that kind of platform to get their news and information."

Are E-readers here to stay?

Patrick LoBrutto, an editor and writer, said, "I think we've passed the tipping point. I think really just a matter of time before they become completely accepted."

Jeff Jarvis, the author of "What Would Google Do?" and associate professor at City University of New York Graduate School of Journalism, agreed the tipping point has passed.

On "The Early Show" he said, "Everything that can become digital, will. And it's what we're seeing with newspaper. I read mine on my iPhone. You can get it on the Kindle right now. You can use these devices, and it saves time and money and effort and (they are) a way to get more stuff than ever."

So how will the business of publishing change?

Jarvis said, "The Internet abhors middle men. It abhors waste. It creates direct connections. So what happens now is an author can write a book and it can go onto Kindle in no time flat. You don't need that middle process. Bookstores are closing. I think what's happening to news and newspapers is happening in books."

But will books themselves change?

Jarvis said they already are.

"Now the book can be digital, which means it can be updated, corrected, discussed. It can include multimedia, it can be found through search," he said. "The form of the book itself must change."