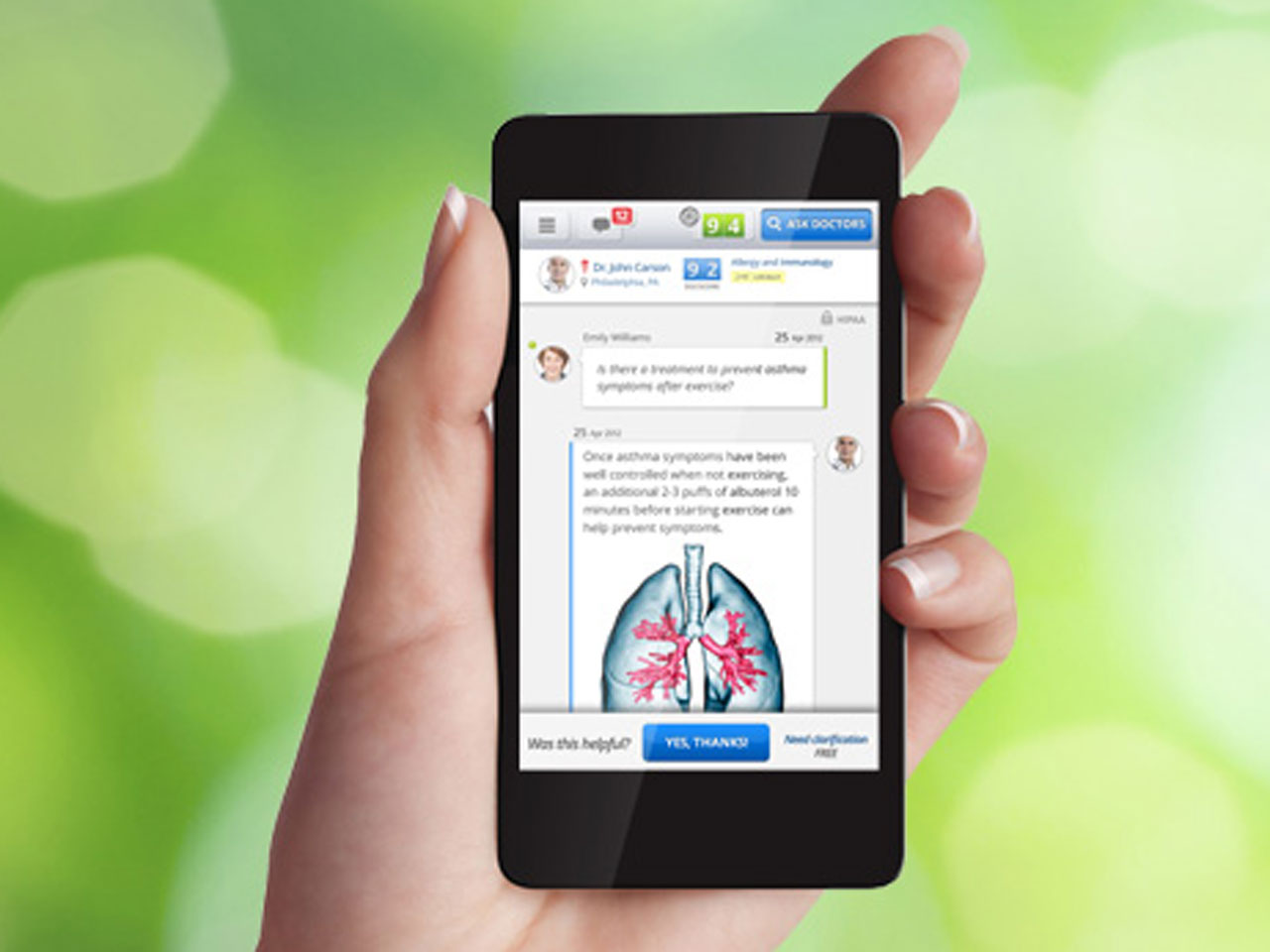 (CBS News) When most people have a medical question, they head to the doctor's office. But, what if instead you could type out a question in your phone and have it answered by physicians without leaving your home or office? What if you could go a step further and send test results to a specialist on a weekend and receive a personalized explanation in your inbox?

That's exactly what HealthTap is attempting to do for its users. The website and app, available on iPhone, iPad and Android, connects regular people with more than 14,000 U.S. licensed physicians in 115 different specialties who can answer questions about medical concerns. It's not the only app out there attempting to answer patient's pressing questions, but it claims to be the only one that contains a HIPAA-secure feature to send out medical records, meaning that private conversations you have with a doctor are considered confidential.

While founder and CEO of HealthTap Ron Gutman's experience is in business, he's worked with organizations including Stanford University on their personalized health care systems for about a decade. What he realized over that time was people turn to the Internet for their health questions. Google had reported receiving 1.4 billion searches on health every month, and more than 80 percent of people reported using the Internet for health information, according to a PEW survey. That same survey revealed that 59 percent of people with chronic conditions and 40 percent without called online health information useless.

"If people already go to the Internet, let's figure out why they are so disappointed, why they are so unhappy with the information they find," Gutman told HealthPop. "We started doing research and focus groups and discovered that people find a lot of information on the Internet, but they don't know who to trust because every search that you are running (pulls up) multiple websites, and everyone says something else."

What people said they trusted were doctors: More than 90 percent of surveyed participants said they honored their physicians' opinions the most.

The way HealthTap works is any user can ask any question, which will be answered by one of the physicians, who are all screened and guaranteed to be in good standing. The question and answer (but not the asker's name or account) will be posted publicly for all the other registered members to see.

"HealthTap is the only place on the Internet... that you can ask any questions and you can get an answer from a U.S. licensed physician sometimes in minutes but definitely less than 24 hours for free," he said.

However, if a person wants to ask a personalized question to a particular doctor or send along their charts, they'd have to pay a small fee, usually $9.99. Using the apps system, they would be able to upload pictures and medical documents to further explain what they are asking about. A free clarifying question or two follow-up questions at $5.99 each are allowed. The questions are guaranteed to be answered with 72 hours or the person gets their money back. All private correspondence in this platform is considered confidential.

While paying $9.99 for a question may seem costly, Gutman explained that the average person who doesn't have insurance pays about $200 each visit and co-pays average out to about $29. Seeing that 25 percent of all doctor's visits are just patients asking questions, he feels the app not only saves time for both parties but also provides quick, accurate reassurance.

Dr. Patrick Weix, an obstetrician/gynecologist in Irving, Texas, who is one of the doctors featured on HealthTap, liked using the app, but didn't realize how valuable a tool it could be until he answered a question from a woman asking if antidepressant medication was safe for pregnant women. A few days later, the woman was thanking him in his office for his quick response - he hadn't recognized her on the app as one of his patients. She told him that she didn't want to call anyone about the question even though it was bothering her because it was the weekend, but the app allowed her to get her concerns answered quickly.

The app may also help curb incorrect self-diagnoses, which have been spurred by the ease of searching for medical conditions online or finding answers that may not pertain to a specific case. One time, Weix noticed a message from a young woman who was concerned that she might be pregnant because she had unprotected sex. She had looked up some symptoms online, and even though she had her period and tested negative on a pregnancy test, she was still concerned. While Weix reassured her that there was a very minute chance she was pregnant, he realized that the symptoms she was experiencing might be from an STD and urged her to get tested.

With so many symptoms shared by a variety of diseases, just searching for what you are experiencing online might not give you a correct diagnosis, Weix said. While HealthTap doctors can't 100 percent tell you what's going on with you, they can at least steer you in the right direction.

"If you have headaches, fever and a cold, you can have anything to dengue fever to Ebola to sinusitis," Weix explained. "But, it's not likely that you have dengue fever or Ebola: You probably have sinusitis."

Dr. Bradley Flansbaum, an internist at Lenox Hill Hospital in New York City, agrees with Weix. Although he is not involved in HealthTap, he can see benefits of doctors helping people find out what's wrong with them without the patient having to pay a fee or take time out of their daily lives.

"There are countervailing forces," Flansbaum said. "We can dwell on the negative of people doing their own research, but what about the features in which people do their own research and avoid expensive trips to the emergency room and get their questions adequately answered and get a better sense of well-being?"

There are some benefits for physicians as well. Gutman explained that if a person likes answers from a specific doctor, they can set up an appointment with him or her directly.

But what Weix finds most helpful is reading other doctor's explanations about medical terminology. He said it's often hard to explain procedures to the average person without slipping into complicated scientific words and concepts. For example, he'd have difficulties describing what organs are removed for different types of hysterectomies, but now he uses another doctor's simplified answer he found on the site.

"It's really a good way to explain it so most people can understand it," he said. "There's a reason why not everybody goes to medical school. It takes a lot of time, but a lot of people have these problems."

Still, Weix doesn't tell all his patients to jump on the app and ask him questions any time they like. He admits that he's only answering questions a couple times a week, and that if someone wants a response from him, they're better off contacting him directly if it's an emergency or setting up an appointment for an answer. That's part of the problem of the app, he pointed out: A lot of times, the best answer for the question is that the person should make an appointment and see their medical provider.

"I don't think it's the be all and end all," he explained. "I don't think that's it's the answer to all health questions, but I do think it is a good way for physicians to get and answer questions."

Flansbaum added that medical apps like HealthTap are exciting and new technology and the positive or negative impact on the health care industry won't be known for quite some time.

"We're in an early phase of app development and the use of different kinds of platforms of medical care," Flansbaum said. "To render opinions on what will work and what won't work is premature. We're going to have test these things and see how it goes."