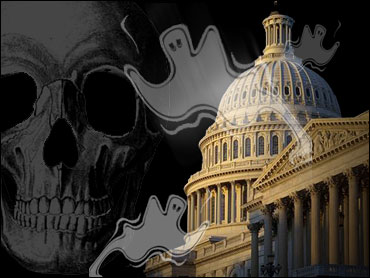 Murder, curses and demon cats. Statues descending from their pedestals for midnight minuets. There are scarier things than lawmaking going on inside the U.S. Capitol.

Walk through the Rotunda late at night and the only sound might be the 180-foot-high iron dome creaking in the cool air. But those with sharper ears and broader imaginations might also hear, behind the 850 doorways, the footsteps of the stricken John Quincy Adams or the assassinated James Garfield.

There was plenty of noise Thursday, as authorities closed down the House after guards saw what they thought was a firearm on a security camera at a Capitol office building across the street. It turned out to be a toy, part of a Halloween costume an employee was bringing in.

Halloween or not, the 200-year-old Capitol is said to be one of the most haunted buildings in Washington, says Jim Berard, Democratic communications director for the House Transportation Committee. Berard compiled some of the more famous ghost stories in his recently published "The Capitol Inside & Out," a history of the nation's legislative center.

The building got off to a bad start in 1808 when construction superintendent John Lenthall disagreed with architect B. Henry Latrobe over the vaulting in the room now known as the Old Supreme Court Chamber. When Lenthall tried to remove braces from the vaults, the ceiling collapsed and crushed him. In his last breath, legend goes, Lenthall put a curse on the building.

Tragedy struck again in 1848 when John Quincy Adams, who was elected to the House after serving as president, had a stroke on the House floor, now Statuary Hall, while giving a speech against the Mexican War. He died two days later in a room off the floor, and Capitol workers have since reported hearing Adams' footsteps, or the specter of the old man trying to finish his speech.

Among other spirits spotted in Capitol hallways are James Garfield, a former House member who was shot just four months into his presidency and died two months later, and his hanged assassin, disgruntled office seeker Charles Guiteau.

Washington's famed city planner, Pierre Charles L'Enfant, who died impoverished and embittered by the way Congress had treated him, has also been seen in the subterranean rooms of the Capitol, carrying a roll of parchment and shaking his head, according to John Alexander, author of "Ghosts: Washington Revisited."

Alexander also relates how late at night, after the politicians have gone home, a pounding gavel has been heard in the house chamber, as Speaker "Uncle Joe" Cannon and his 1911 successor, Champ Clark, continue their feuding.

Disbelieving reporters might avoid a House hallway where in 1890 journalist Charles Kincaid shot and killed Kentucky congressman William Taulbee after an argument. The legend is that black spots on the stairway are Taulbee's blood, and that Taulbee gets his revenge by tripping up reporters on the stairs.

The spirit of the doughboy who lay in state in the Rotunda in 1921 as the Unknown Soldier from World War I is said to return when others lie in the Rotunda. Civil War general and senator John Logan is also said to return to the old Military Affairs Committee room, with the door to the room quietly opening and the general appearing, surrounded by a blue haze. In the 1930s workmen discovered a sealed-up room containing what many believed was Logan's stuffed horse.

Then there's the "killer bathtub," an ornate Italian marble tub that was one of several enjoyed by 19th century senators. Ulysses S. Grant's vice president, Henry Wilson, in 1875 fell asleep in the tub, was chilled by the cooling water and died of a stroke in his Senate office that night. Visitors to that office say they can catch a whiff of the scented soap used in the long-abandoned Senate bath.

Berard says the most famous Capitol apparition is the "Demon Cat," thought to date back to the early days when cats roamed the building to keep the rat population down. The cat, said to appear at times of national crisis, grows to enormous size before suddenly vanishing. Legend has it that one guard fired his gun at it, and another was so frightened he suffered a fatal heart attack.

Some claim that on the night a new president is sworn in the statues in Statuary Hall dismount for their own inaugural ball, and that Civil War foes Grant and Robert E. Lee have been seen meeting for a reconciliatory handshake. The one problem here, Berard noted, is that there are only six statues of women in the National Statuary Hall Collection to dance with 91 men.