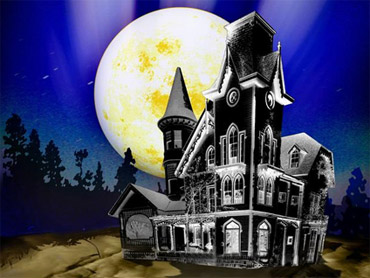 How about checking into one of America's "haunted" hotels, where the promise of a sleepless night is actually a selling point, not just on Halloween, but year-round!

There are scores of hotels across the country that claim to be home to ghosts. And many don't hide their spooky pasts and perhaps presents; they actually advertise them and attract plenty of visitors hoping to catch a glimpse of the guests from another world.

CBS News "Trick or Travel" Editor Peter Greenberg highlighted some of the spookiest spots around the nation, where ghosts may never check out!

THE MYRTLES PLANTATION, St. Francisville, La. (From $115 a night)

Rhe inn is supposedly the site of 10 murders since it was built in 1794.

The inn is haunted most notoriously by a former slave named Chloe. One of the former owners allegedly took Chloe from her work in the fields to make her a mistress and house slave. Eventually, Chloe began to worry that the owner was losing interest in her, which would mean she'd have to return to working the fields. She decided to start eavesdropping on his conversations in hopes of finding something out. One day, the owner caught her listening in on his business dealings and cut off her ear as punishment. After this disfigurement, Chloe reportedly donned a green turban from that day on. Chloe didn't return to the fields immediately, but she still worried as she stewed over her punishment. One day, she hatched a scheme to poison the children's birthday cake with oleander leaves.

The stories differ about why she poisoned the cake. Some say she was hoping to rush in and save the day by treating the children with the antidote, thus proving she was too useful to return to the fields. Others say it was pure malice and getting revenge for cutting off her ear.

Regardless, the grounds of the Myrtle Plantation are now haunted by the ghost of a woman wearing a green turban. Guests and employees have also reported seeing the ghosts of two little girls in old fashioned clothing frolicking on the grounds and peaking from behind windows. There are various rumors to explain the heavy concentration of paranormal activity. Some claim the plantation was built atop an ancient Indian burial ground.

The Fairmont in Vancouver is allegedly haunted by a friendly spirit known as "The Lady in Red."

Back in the 1940s, the very elegant Jennie Pearl Cox was a regular at the Fairmont Hotel's ballroom. She was killed in a car crash just outside of the hotel in 1944, wearing her favorite red dress.

The hotel was originally built with eight elevator shafts to accommodate the guests. However, budget problems forced builders to install only six elevators, leaving two shafts empty. One of these empty shafts is reportedly home to The Lady in Red.

Porters, employees, and guests have all claimed to catch this mysterious woman after rounding the corner on the mezzanine level, just as she opens the door to get on or off the elevator. But here's the catch: the shaft is empty - there is no elevator or even a door.

THE MORRIS RANCH FARMHOUSE, Greenough, Mont. ($1,000 a night for the whole house - all ghosts included!)

The Morris Ranch Farmhouse at Paws Up Resort, Greenough, MT

I just returned from a trip there (it's about 30 minutes from Missoula), andi can tell you this is a phenomenal resort, but this one ranch farmhouse on the property really freaked me out.

Many guests and workers at the Morris Ranch House have reportedly encountered the ghost of a young girl. The girl, Sarah, is said to have died there and was buried in the barn. Previous owners were warned not to burn down the barn, but they did anyway, and now the girl's spirit is not at rest.

Guests have also reported seeing a woman in blue (nicknamed "Patsy" by the staff), a lanky man, and the spirit of a young boy. One guest allegedly was awoken by a beeping from the microwave, which read "please…please…please" on its screen. He pushed stop, went back to sleep, and was awoken later by the same problem.

The spirits, while friendly, are said to be mischievous, turning lights on and off, repositioning items in rooms, and appearing in the windows of otherwise vacant rooms.

Maids were cleaning the bathroom, then went to the bedroom to clean those. When they came back to the bathroom, both sinks were filled to the brim with water, and no water was running.

Staff and guests have experienced ghostly happenings in one of the most haunted parts of the country. There is reportedly a ghost who lives on the fifth floor. She checked into room 500 and would go upstairs to the turrets to watch for her fiancé who was at sea. When she received word that he died, she hung herself a month later from one of the turrets. Sadly, after another month passed, her fiancé returned from sea, alive and well.

Staff has reported feeling cold breezes around the room and a light shining from the turret despite no source of power, and sometimes, when trying to set an electronic key for room 500, the equipment will malfunction so that she has the room all to herself.

HBO made a popular series about the violent Wild West town of Deadwood, focusing heavily on its real first sheriff, Seth Bullock. After Wild Bill Hickok was gunned down in Deadwood in 1876, Bullock brought law and order to the frontier town. The steely-eyed Bullock could allegedly "outstare a mad cobra or rogue elephant."

Bullock and his business partner Sol Star built a luxury hotel in Deadwood, which he reportedly still visits despite the noticeable handicap of being dead. Bullock apparently doesn't like it when his workers are lolly-gagging, because he often appears when workers are slacking off.

Guests have reported seeing Seth Bullock's apparition in the hotel, including cloudy figures, feeling touched by unseen hands, and seeing strange figures in photographs. Appliances turn on an off by themselves, and electronics that aren't even plugged in have been said to somehow turn themselves on. Some have even heard their names called out by a man, or being tapped on the shoulder by invisible hands.

Food Quiz: How to Avoid Sabotaging Your Diet