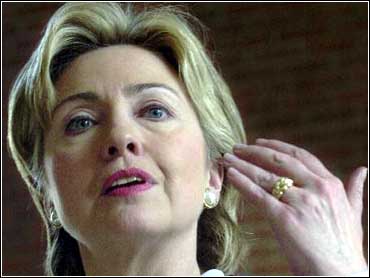 Gender politics are alive and well in the New York Senate race between Democrat Hillary Rodham Clinton and Republican Rick Lazio. And it ain't pretty.

A "shrill and scheming person," Hillary is "cold-blooded and hotheaded," and "power hungry." Her Senate bid, "shameless."

The only pages missing from Powers' desktop thesaurus are the ones that define "trollop," "harpy," and "shrew."

No political naïf, Hillary knew all along that politics is a contact sport. But "abrasive and annoying, brash and bitter"? "Distant and deceitful"?

There's something else going on here.

Hillary's gender has always been in play, perhaps in part because she's known primarily as a wife. An Esquire magazine profile of Candidate Clinton led with the (male) writer's musings on her "sexy mouth."

Read an anti-Hillary
fund-raising letter
mailed out by the New York GOP
But can they still do that? Is there even a corollary insult to use against a male candidate? What can Hillary's war room do to Lazio, call him "short"? Balding? A lousy tipper? Oh, wait, that's been said of Hillary, too.

Ever since Abigail Adams's husband - future president John Adams - ignored her entreaty to "remember the ladies" at the drafting of the Declaration of Independence, women have understood the political playing field tilts the guys' way.

Wayne Fields of Washington University, an expert in political rhetoric, cited a more recent example. "Pat Schroeder had to deal with this all the time," he said of the Democratic congresswoman who sought the presidential nomination in 1988. "But it's become more extreme as the Republican Party has become more conservative and more extreme."

The subtext of the name-calling, said Fields, is Hillary "is a woman who wants what is properly a man's. She has all the weaknesses of a woman who aspires to be a man. It's like Shakespeare where the women have to defend themselves against [suspicion that they're] trying to be manly."

Fields said the double-barreled diss could backfire on New York Republicans. "I think they're playing into her hands. Forcing the language into extremes is going to make the sexism ... more obvious." There is a B>"point at which it become rhetorical fodder for the other side."

The notion that the letters are sexist is the "wrong interpretation," said Powers spokesman Dan Allen.

The letters, Allen said, "obviously strike a chord with the voters," because they're bringing in "tens of thousands" of dollars a day.

Jong doesn't doubt the effectiveness of the Republican verbal barrage.

"Don't be fooled," she said. "This is why the Congress of the United States is only nine percent female. This is why unlike the U.K., Ireland, India, etc., we have never had a woman president - let alone a woman VP. This is the dirty old game of male power politics. And it works."