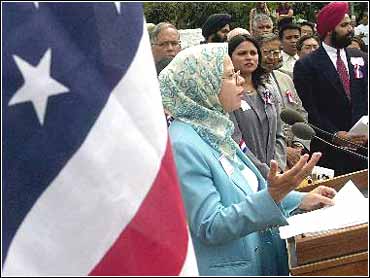 Adel Karas was killed at the store he owned and ran for the past 20 years in Los Angeles. At first, it looked like a robbery, but given the current anti-Arab climate in the U.S., investigators now think it may be a hate crime, reports CBS News Correspondent Manuel Gallegus.

Kara was 48 years old, the father of three -- and not even Muslim. He was an Orthodox Christian. But since Sept. 11, there have been dozens of attacks against Muslims or anyone who looks like that. In Mesa, Ariz., a Sikh Indian gas station worker was singled out and shot to death.

In Seattle, a man with a gun was arrested for suspected arson outside a mosque.

In San Diego, an explosion outside a mosque forced worshipers to evacuate.

The FBI is investigating more than 40 possible hate crimes nationwide. Arab and Islamic groups says there have been many other incidents, ranging from phone threats to verbal assaults.

For those who knew Adel Karas, these acts of hatred are unthinkable and frightening.

"Turning against each other is not going to solve anything," says Mandi Kakish, a friend of the victim. "Two wrongs don't make a right. I just want to live in peace. Right now, I can't live in peace. I know a lot of us can't."

Meanwhile, in Berkeley, Calif., a cartoon showing Muslims in hell ran in the campus newspaper at the University of California, Berkeley, this week, and students there are demanding an apology.

"This is what a stereotype is," said law student Will Youmans, one of several students who denounced the cartoon Wednesday from the steps of Sproul Plaza, site of the 1964 demonstration that became the Free Speech Movement.

The cartoon, which ran in the Tuesday edition of The Daily Californian, UC Berkeley's student newspaper, shows two large-nosed, bearded men wearing robes and turbans, sitting in a satanic hand surrounded by the fires of hell.

One man has dropped a flight manual. The other, apparently unaware of his destination, is saying, "We made it to paradise. Now we will meet Allah and be fed grapes and be serviced by 70 virgin women, and ..."

Students upset by the cartoon said it vilifies Muslims and fosters antipathy toward Arab-Americans, who already have felt a backlash since the Sept. 11 attacks on America.

Both President Bush and Attorney General John Ashcroft have denounced the backlash. Those who reach out in anger "represent the worst of humankind and they should be ashamed of their behavior," Mr. Bush said as he visited the Washington Islamic Center.

"People in the Sikh community want to go and help - to give blood and clear rubble from the World Trade Center and serve meals. And we are doing that," said Harpreet Singh, a spokesman for the New York-based United Sikhs in Service of America. "But some are too afraid to go."

An arson attempt at a Muslim-owned gasoline station in Central Texas is under investigation as a hate crime and law officers are checking out reports that Pakistanis could have been targeted elsewhere in the state. An incendiary device was thrown at a Conoco station in Southeast Austin early Saturday, but no damage was reported.

The device fell short of the store, which had closed at midnight, and burn marks were left on a sidewalk, said Travis County sheriff's department officials. The store owner, a Muslim and a native oPakistan, was uninjured.

"I love this country," the business owner, who spoke on condition of anonymity, told the Austin American-Statesman in Monday's online edition. "That's why I'm here. We gave money. We gave blood for this country. What more can we do?"