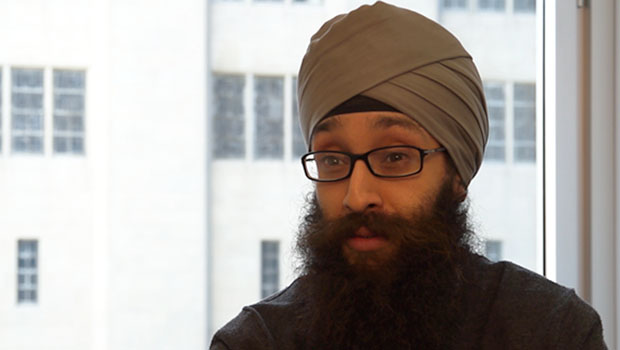 Authorities have made an arrest in the investigation of an alleged bias attack against Dr. Prabhjot Singh, a Columbia professor and practicing Sikh who was accosted by a group of men in New York City last fall.

While the police have been probing the incident, Singh's primary focus has been on raising awareness about the Sikh religion and culture.

"You know we are a small community ... population-wise in the U.S. and yet we are deeply embedded in the communities across the country," Singh said in a November interview.

Singh, who teaches international affairs at Columbia and is also a practicing physician at Mount Sinai Hospital, was attacked in September in Harlem by a group of young men -- around 20 to 30, he estimates -- some of whom allegedly were yelling "Osama" and "terrorist" as they assailed him. Singh was left with a fractured jaw and several bruises.

On Saturday, police arrested Christian Morales, 20, who now faces hate crimes charges in connection with the attack. Morales admitted to pulling Dr. Singh's beard, according to a criminal complaint filed by the Manhattan District Attorney's office.

Singh declined to comment on Saturday's arrest, but within the past year he has worked successfully toward changing the way the FBI tracks hate crimes so that Sikhs are counted separately.

"The way that it used to be was that attacks against Sikhs were just lumped into categories as anti-Muslim, and it's really not how we see it. It is really important to understand the roots where hate crimes come from in order to adjust them. If you can't be counted it's hard to come up with solutions," he said.

The irony that his attack might be one of the first captured by the hate-crime tracking system he helped advocate for isn't lost on him. However, at the same time, he said that statistics don't solve problems, they simply help you understand them.

To promote greater understanding, Singh has been reaching out to the local community to improve communication and educate people about Sikhism.

"We want people to just ask questions. ... Sikhs know that we have to kind of reach out and say 'It's okay to ask.'"

One way people can do that is through Turban Day, an event held periodically throughout the country where Sikhs go out into their community and tie turbans on people while giving them the opportunity to ask questions about the religion and its traditions.

The local Sikh community at Columbia set up a Turban Day shortly after Singh's assault.

"The one in Harlem was actually at the site itself of the attack. And it was a way to say, 'We know something has happened here, but let's open up.' And let's say instead of attacking next time just ask. Really simple way to go about your life, but sometimes you need to feel welcomed to do so," Singh said.

For Singh, the idea of leaving the same neighborhood he was attacked in was not an option. But he wants his message to have a national appeal.

"Ultimately it is a question of what does America look like? How do we want change to look like in the next 20 to 30 years? We've got to work for it."