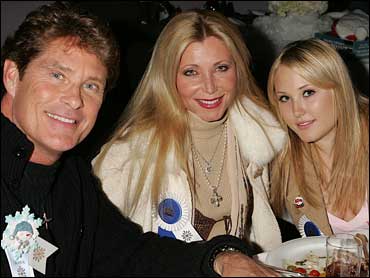 David Hasselhoff and his ex-wife, Pamela Bach, appeared in court Monday for a hearing in their custody battle, and a judge later ordered both sides back to court next week.

The hearing was closed to the media. Outside court, Hasselhoff told reporters: "They've continued the case until the 15th, but the judge asked me not to say anything."

"There was just not enough time to discuss anything," Opri said.

Hasselhoff, 54, and Bach, 43, each seek custody of their daughters Hayley, 16, and Taylor-Ann, 14. The two were married in 1989 but divorced last year and have been sharing custody.

Hasselhoff, a recovering alcoholic, lost the right to visit his daughters for two weeks last month after a videotape surfaced showing the singer and former "Baywatch" star shirtless and apparently drunk, eating a cheeseburger on the floor of his Las Vegas home in April. One of his daughters is heard chastising him.

His rights were later restored.

Meanwhile, Hasselhoff told the syndicated entertainment TV show "Extra" that he was humbled by the support he received after the videotape aired.

"It's not about how long you're down, it's about how you face getting back up. And I'm up and running," he said in the interview, taped in Las Vegas.

Hasselhoff appeared until recently in a stage production there of the musical "The Producers." He will resume his judging job on the NBC show "America's Got Talent," which makes it season premiere Tuesday night.