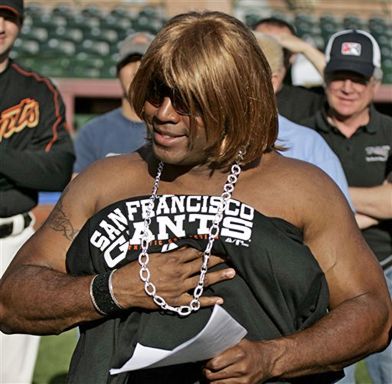 Dominik Hasek, worried that his children are losing their Czech heritage, will retire from the NHL after the end of next season.

"I have decided that the upcoming season will be my last," Hasek said Thursday at a news conference in Prague.

"I'm announcing it now so that when the season starts I can minimize the distraction for my teammates, for me and the Buffalo Sabres organization so we can concentrate only on hockey," said the star goalie known as the Dominator.

"I want to have lots of fun with my teammates."

Hasek, 34, who won the NHL's most valuable player award in 1997 and 1998, helped the Sabres reach the Stanley Cup finals this year and led the Czech Republic to Olympic gold in 1998.

Hasek said one reason for his decision was that his family wanted to move back to the Czech Republic after hockey. He and his wife, Alena, have a 9-year-old son, Michael, and 4-year-old daughter, Dominika.

"We want our kids to go back to Czech Republic and share in our families' backgrounds and culture," Hasek told. "I can see every year it's more and more difficult, especially for my son, to adapt to the Czech life. Every year he has more problems to speak Czech. This is one of the reasons."

"The longer we stay in the United States, the harder it will be for our kids."

Hasek said he still had hopes for bringing the Stanley Cup to Buffalo, saying he wanted to win the last game of the season.

He also said he would like to stay connected with the team in some fashion after his retirement, but also would build hockey programs in the Czech Republic.

He said he planned to be involved with the Variety Club in Buffalo in a program to interest inner city youth in hockey.

A five-time choice as the NHL's best goalie, Hasek struggled much of last season with a groin injury. Despite that, he helped the Sabres reach the Stanley Cup finals, losing to Dallas in six games.

Hasek, known for flopping to the ice to block shots and even releasing his stick and grabbing for the puck with two hands, was paid $7 million last season. Only Patrick Roy of the Colorado Avalanche, who made $7.5 million, had a higher salary among goalies.

Buffalo acquired Hasek in 1992 in a trade from Chicago, where he was a backup to Ed Belfour.

Belfour was in goal for Dallas when the Stars beat the Sabres on a controversial triple-overtime goal bBrett Hull in Game 6. Hull's skate was in the crease, but the goal was allowed.