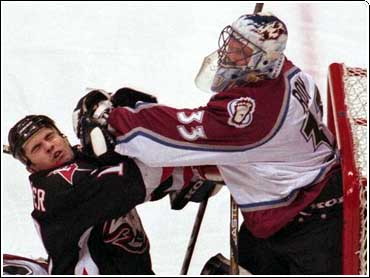 In only his second game in more than three months, Dominik Hasek was his usual brilliant self. No rust. No problem.

And why not? Hasek called it "one of the easiest shutouts I've ever had."

Hasek made 24 saves for his 43rd career shutout, and Miroslav Satan scored an unassisted, short-handed goal as the Buffalo Sabres beat Colorado 2-0 on Tuesday night..

Hasek, who returned to action a week ago after missing 40 games because of a groin injury, recorded only his second victory of the season. Colorado's Patrick Roy had 25 saves.

"I feel better than I felt last week after my first game back," Hasek said. "The reason I feel better is that it was a pretty easy game for me. I don't think Colorado had more than five chances the whole game. On two of them, my teammates made the save. I was sharp, but my teammates were even sharper."

Buffalo coach Lindy Ruff said Hasek "made some key saves at key times. You can pull out any adjective you want. I've already said that the work he's put in has been unbelievable the two-a-days, the off-ice work with his Czech coach. Dom was ready to play on limited practice time."

"They scored first and then clogged up the neutral zone," Hartley said. "We had a few chances, but Hasek was sprawling everywhere, like usual. He was finding ways to stop the puck."

"Hasek saw everything, and their defensemen were outstanding. They cleared the front of the net, played simply and frustrated us by flipping the puck out of the zone all game long."

Dixon ard added a goal with 3:58 left in the third period.

The Avalanche played without star forward Peter Forsberg, who missed his second straight game because of a concussion.

"Shutouts from him (Hasek) are a common thing," Satan said. "After a long layoff, it isn't surprising, but it still amazes me."

The Sabres began the night five points out of a playoff spot in the Eastern Conference.

"This was big for us," Satan said. "Time is running out for us. We had to have this one with four teams playing for the last playoff spot."

In the opening period, Buffalo, which has the worst power play in the NHL, failed to capitalize on a four-minute high-sticking penalty against Colorado's Aaron Miller that included a 5-on-3 advantage for 45 seconds after an additional cross-checking penalty against Alexei Gusarov.

But at 13:41 of the period, Satan corralled a loose puck at mid-ice and scored from the slot his third short-handed goal of the season and 27th overall.

Satan said Colorado's Brian Rolston "lost the puck and I put a shot on net. I was lucky to get it in because I was so far away."

Colorado had an 8-2 advantage in shots in the second period, but again Hasek, protected by his teammates' neutral-zone pressure, was perfect in a scoreless period. Colorado had only three total shots on its three power plays in the period.

Ward made it 2-0, taking a pass from Satan in the right circle, crossing in front of the goal and backhanding a shot past Roy.