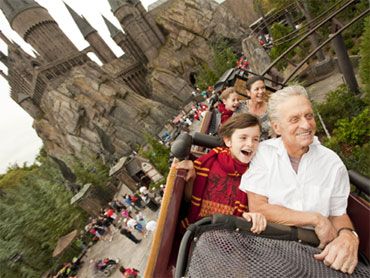 Has Michael Douglas "turned a corner" in his fight against throat cancer?

That's what Sharon Cotliar, assistant editor of People magazine, who recently interviewed the star, theorized on "The Early Show" Wednesday.

"You can see it," she said. "He has more energy, his voice is back, that gravelly voice is back. I think he's turned a corner but very cognizant of the fact he has a long way to go."

CBS News correspondent Betty Nguyen reports that recent family vacation pictures tell the story of the 66-year-old Oscar winner having the "time of his life" with wife Catherine Zeta-Jones and two children on a Florida vacation over Thanksgiving. Michael Douglas tells People magazine his recovery from stage four throat cancer is going well.

Julie Dam, senior editor of People magazine, told CBS News, "The fact that Michael Douglas was able to fly Florida and go to an amusement park with his kids definitively shows that he is better in some ways. You know, his treatment is over, he seems to be healthier, he looks better."

After the star complained of a sore throat early last summer, doctors discovered a walnut-sized tumor on the base of Douglas' tongue. He spoke publicly -- and courageously -- for the first time in late August on "The Late Show with David Letterman," saying, "I've got cancer. I found out about it three weeks ago."

In September, fans cheered the ailing actor as he walked the red carpet, but Douglas didn't speak and soon dropped out of the public eye.

Nguyen reports that a friend close to the actor sremembers Douglas saing,"The first four weeks after the treatment were hell…that was the worst part."

Unable to eat solid foods, and in constant pain, Douglas lost 20 pounds during a grueling eight-week regimen of radiation and chemotherapy. In rare glimpses, he looked haggard and gaunt, but recent vacation photos indicate an evident change in Douglas' appearance.

For now, Nguyen said, Douglas is taking advantage of the good news, and hoping he keeps winning the fight.

Ashton said, "First of all it takes a while after a tumor unable to be removed with surgery - his apparently too large to be removed with surgery - (is) treated with chemotherapy and radiation. Those treatments obviously kill the cancer; they also do damage to the surrounding tissue and the anatomy. There's irritation and inflammation. As those cancer cells die and shrink, that takes time. That's why doctors need to actually wait and need to go back and will be doing that routinely with surveillance and follow-up to see not only how that actual tumor site is doing and shrinking and dying, but, also, so that microscopic tumor cells that may have not been detected originally don't spread and crop up other places."

She said, "Radiation is a grueling process, especially when your throat is radiated. Obviously you can't swallow, you can't drink well, you can't eat well. So, when he gets that nutrition back, when he gains weight, when his body strength is increased, we're going to see a big difference."

But how is Douglas' family doing as he faces this cancer fight?

Cotliar recalled, "Michael said ever since he married Catherine he's grateful for the second chance for building his family, but in reality, I think this trial of having to go through cancer has brought them even closer together. I think he appreciates that second chance even more."

Hill pointed out some criticisms of Catherine Zeta-Jones during her husband's treatment, saying there was speculations that she was not there for him.

Hill said, "Is that even a question?"

Cotliar, of People magazine, said, "Not at all. Michael wanted them to approach this as onward and upward, you know, and Catherine followed his lead. Her attitude and the Welsh in her said, 'Let's just deal with this,' and that was their attitude throughout. They are very much united."

Hill saiad a positive attitude can have a huge impact on cancer. But the threat of developing a new cancer, she said, is still a possibility for the actor.

Ashton affirmed Hill's statement, saying, "That's the case with a lot of cancers. There's really two reasons: one, the process that caused the initial cancer -- which sometimes we understand, sometimes we don't -- obviously that's still at play. Then, sometimes the treatments like radiation therapy can actually, ironically, while it gets rid of the cancer, later on by doing damage to the cancer cells can actually trigger potentially another cancer. So, again, follow-up, surveillance, huge part of anyone who's battled cancer and really part of their life."

But Douglas doesn't seem to be bogged down by his diagnosis.

Hill said the star is preparing for his next film on piano legend, Liberace.

Cotliar said, "That's right. In fact, after the holidays he will be taking piano and voice lessons so we'll hear him sing apparently."