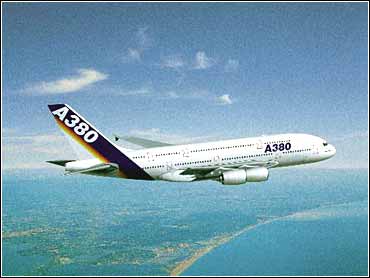 It used to be when you bought a ticket to fly, you were almost always booked onto a plane made in America—most often, a plane made by Boeing. Then, reports CBS News Correspondent Bob Orr, along came Airbus.

The European consortium born 30 years ago is now selling nearly as many new planes as Boeing and making noticeable inroads in the U.S. market.

Airbus has already been successful in winning a sizeable share of the smaller jet market. But, in Toulouse, France, it is building a jumbo jet that will take aim at Boeing's king of the long haul—the 747.

Is Boeing vulnerable? "Yes," says aviation analyst Richard Aboulafia. "I think the 747 is a weak link, not just for Boeing, but for the U.S. aviation industry in general."

Aboulafia believes that, after decades of dominance, the 747 is ripe to be challenged.

"It's been in service for over 30 years. It is a relatively old design."

But that's not the way the chief of the Boeing Airplanes Group sees it.

"The fundamental airplane, every year, has improved," says Alan Mulally. "And so when you look at a 747 today, when you see one land, it has 30 years of technical innovation."

Boeing is so committed to the 747 that it's now trying to find buyers for an all-new stretched version.

"We're talking about a little larger 747 that can carry a few more people, go a little farther in range," Mulally says.

Boeing also is updating its sleek 777 so it will be able to fly farther than all other planes.

But Airbus is raising the stakes even higher with a double-decker jumbo jet set to debut in five years. Backed by cheap government loans, Airbus is selling some planes at huge discounts—an option Boeing can't afford.

In any case, irlines are having a field day playing Boeing against Airbus, driving down costs while putting new passenger-pleasing jets in the skies.