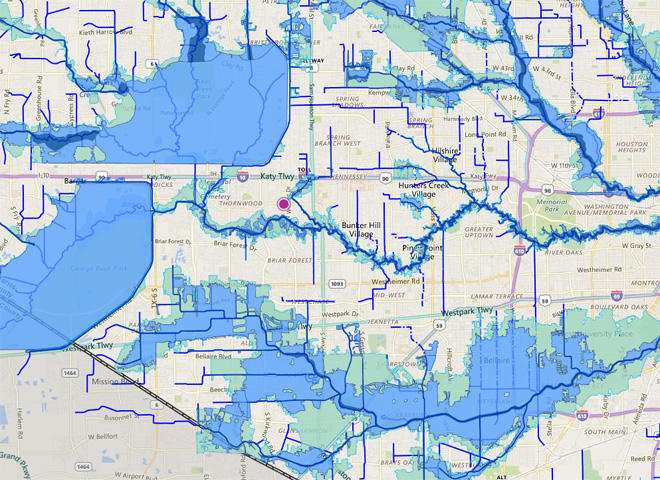 Harvey's catastrophic flooding is the latest chapter in Houston's history of floods.

Tropical Storm Allison in 2001 caused nearly $5 billion in damage. The Memorial Day floods of 2015 dumped almost 12 inches of rain in 10 hours. And last year, 1,200 people were rescued after a flood on Tax Day.

Chief weathercaster Lonnie Quinn of CBS Station WCBS in New York City explains why flooding is such a big problem in Houston:

There are a lot of factors at play. For one: Houston's elevation. The city is relatively flat and is barely above sea level. Downtown is only about 50 feet above sea level, and there's only about a four-foot change between the highest and lowest parts of downtown. That means when rain falls, it has nowhere to go, and takes a long time to drain out.

Once the bayous flood, the freeway system functions as a de-facto secondary flood control system, even though it isn't supposed to. New freeways are built to handle 100-year floods, but we've already exceeded the conditions that define a 100-year flood at in many spots with the flooding from Harvey.

Once the water overtops the freeways, you get to the residential streets which are recessed in a bit as a final small flood control measure. As soon as the water gets above that and onto the sidewalks, homes start flooding.

Some experts also point to Houston's big building boom as a potential factor, in exacerbating the problem  Development decreased the amount of wetlands in the city by almost 50 percent over the last 25 years.

All that hard, impermeable pavement means there's less land to soak up rainfall after a major storm.

Combine all that with the fact Houston is only about 50 miles from the Gulf of Mexico. That puts it right in the path of slow-moving storms that can generate massive amounts of rainfall.

In fact, the number of downpours measuring at least 10 inches have doubled over the last 30 years.

So, when a slow-moving storm like Hurricane Harvey hits the city, flooding can be intense — more intense than ever.

In general, one inch of rain equals about a foot rise in river levels.  With at least six inches still possible in Houston on Monday, the Buffalo Bayou could rise another six feet.

So that means Houston's flooding concerns are far from over.