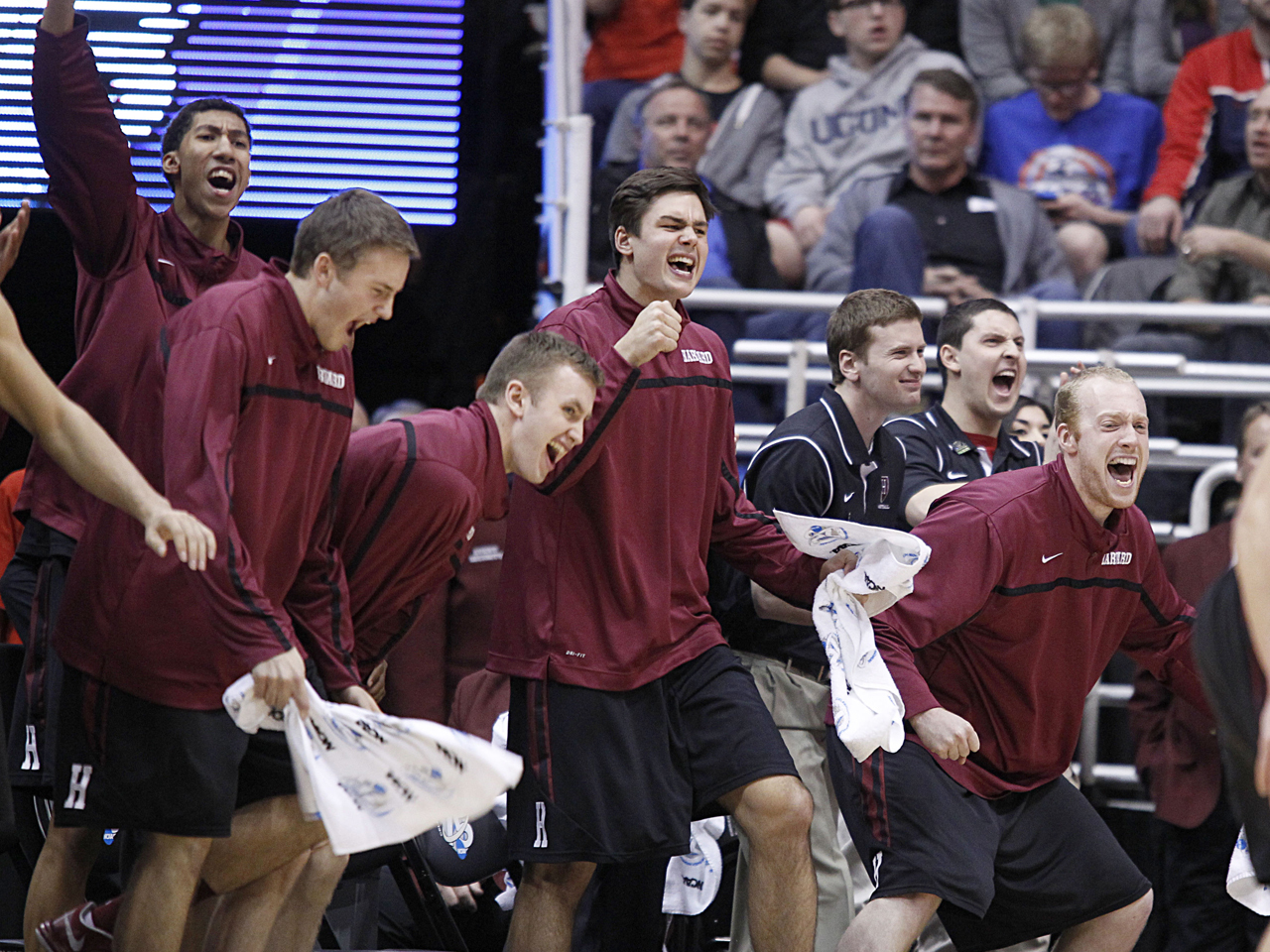 SALT LAKE CITY Give those Harvard kids an A-plus in another subject: Bracketbusting 101.

The school known for producing U.S. presidents, Supreme Court justices and Nobel Prize winners earned its first NCAA tournament victory Thursday night -- a 68-62 upset of No. 3 seed New Mexico -- and it didn't feel like a fluke.

"America, we are sorry for messing up your brackets and also your financial system and everything else," tweeted the jokesters at the Harvard Lampoon.

And this from Harvard's most famous hoops alum, Jeremy Lin: "YYYYYEEEEESSSSSSSSS!!! HARVARD winssss!!! hahahahhah i told you," he tweeted shortly after the victory.

Next up for Harvard (20-9), a meeting with sixth-seeded Arizona, which beat Belmont, 81-64, earlier in the West Region.

"It's unbelievable," CBSSports.com quotes Harvard senior Christian Webster as saying. "We were talking in the back. We're still in disbelief, can't believe it happened."

"This is the No. 1 moment in my career," said Webster, who finished with 11 points. "The thought came to mind that this could be the last game. We showed a lot of toughness, just persevering."

"The way Harvard won remains most impressive," writes CBSSports.com Senior Blogger Matt Norlander, "this was not a plucky upset by an Ivy League team that used trickery or quirk in order to bring down a big boy. Harvard had the lead more often than not during the game. It had some distance in its margin for much of the night. And it fended off foul trouble with three of the seven men total who saw playing time against a taller, more physical, well-rounded Lobos team."

The Ivy Leaguers put the clamps down on New Mexico's Tony Snell, holding him to nine points on 4-for-12 shooting after he dominated in the Mountain West Conference tournament. They banged inside with Lobos big men Cameron Bairstow and Alex Kirk, whose 22 points provided New Mexico's only consistent offense.

Mostly, they showed none of the jitters that marked their trip to the tournament last year, a 79-70 loss to Vanderbilt in the Crimson's first NCAA appearance since 1946.

Rivard went 6-of-7 from 3 in that one, played on New Mexico's home court in The Pit, and was clearly pumped for an encore against the Lobos themselves. He was 5-of-9 this time, with three of them coming in the first half, while Harvard was holding a small lead and, more importantly, answering every surge the Lobos (29-6) could muster. Rivard finished with 17 points.

"I hit my first one, and you know, you hit the shot and then you keep shooting after that, and then I hit another one, so I knew it was going to be a good game after that," Rivard said.

Webster can also shoot the 3. He was more of a role player last year, but jumped to the fore in 2013; he made three 3s and gestured after each one of them, even pointing to his forehead after swishing one from the corner in the first half.

"We battled a really good basketball team in a tough environment," Amaker said. "I'm very proud of our guys."

Amaker outcoached his contemporary, Steve Alford, exacting revenge of sorts for the time Alford's Indiana team beat Amaker and Duke back in the 1987 regional semifinals.

"I've got all the respect in the world for Tommy. He does it the right way," Alford said. "His staff was very well prepared. They had a good game plan and they executed it well."

Based on their regular-season and conference tournament victories, the Lobos were a popular pick to head to the Final Four this season. The school even gave Alford a new, 10-year contract Wednesday that called for a $125,000 bonus for a Final Four trip.

They'll save the money but feel the pain.

The Mountain West Conference, judged one of the top two leagues in college basketball all season, fell to 1-3 so far this week.

Meanwhile, the Ivy League moves on for the first time since Cornell made the regional semifinals in 2010. This year's standard-bearer is Harvard -- that school we've all heard of, but not usually this time of year.

Still, this season's Harvard story is not all about the warm-and-fuzzies.

The team lost its two co-captains before the season began because of an academic scandal that involved more than 100 students.

Amaker, who had plenty of experience in rebuilding projects when he coached a Michigan team recovering from NCAA violations, didn't wave the white flag. He simply asked his team for more.

In stepped freshman point guard Siyani Chambers, who played like a veteran. He wasn't great against the Lobos, finishing with five points and seven assists, but he kept his team under control, poised and found open players.

"We can't shoot for them," Alford said. "We've had games like that, several games where we haven't shot the ball well. It's a glaring weakness on this basketball team."

It allowed Harvard to take a lead for good with about 6 minutes left. When Kenyatta Smith made an 8-foot, left-handed shot to put the Crimson up 59-53 with 4:40 left, Alford called timeout and Amaker ran onto the court to calm his kids down.

They acted like they belonged down the stretch, making five free throws and hanging onto the ball. The buzzer sounded and they stormed the court like any 14 would after beating a 3. But just as quickly, it was over.

"We mentioned to our kids coming into the tournament, we talked about how meaningful this season has been, how they adjusted and adapted and believed," Amaker said. "This adds to that."