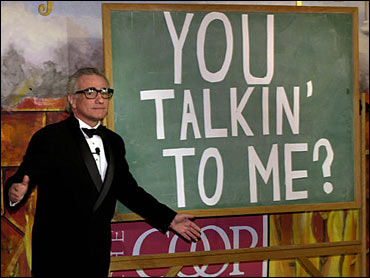 Director Martin Scorsese was given a grammar lesson - and made to wear a curly blonde wig and red-sequined bra - on Thursday when he was crowned Harvard's Hasty Pudding Man of the Year.

Scorsese received the honor at the opening night of "It's a Wonderful Afterlife," a production of the Hasty Pudding Theatricals, an undergraduate dramatic troupe.

"I kind of had inside information that I was going to get the prize tonight so I went along with everything," he said.

Scorsese stood on the stage with a blackboard with the words "You talkin' to me?" written on it, in reference to Robert DeNiro's famous line from the Scorsese-directed movie "Taxi Driver."

A Harvard student dressed as a staid schoolmarm made Scorsese repeat the grammatically correct phrase "To whom are you speaking?"

The city of Cambridge declared Thursday "Martin Scorsese Day" and two representatives of the mayor's office presented him a gold key to the city.

The film "Gangs of New York," a social and political drama set in 19th-century New York, recently earned the director a Golden Globe and was nominated for 10 Oscars, including best director.

The Directors Guild of America is scheduled to honor Scorsese with its lifetime achievement award on March 1.