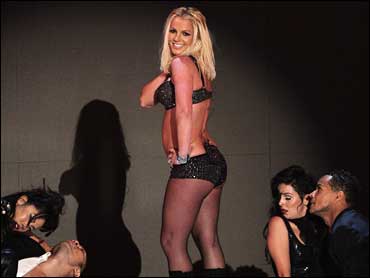 The consensus is clear: Britney Spears performed like she was sloshing blindfolded through mud at MTV's Video Music Awards. No one disputes that the troubled pop princess mangled her much-heralded comeback.

But what about the nastiest comments of all -- those about her body? "Lard and Clear," read Monday's headline in the New York Post. "The bulging belly she was flaunting was SO not hot," wrote E! Online. And so on.

Was it fair? Did Spears, lest we forget a mother of two, deserve to be held up against the standard of her once fantastically toned abs, sculpted by sessions of 1,000 tummy crunches? Or was she asking for it by choosing that unforgiving black-sequined bikini?

More profoundly, in an age where skinny models and skeletal actresses are under scrutiny for the message they're sending young girls, what does it say that we're excoriating a young woman for a little thickness in her middle?

Certainly people were curious to see her. The show drew 7.1 million viewers Sunday, up 23 percent over last year's VMAs, and was the highest-rated cable program of the year among people aged 12 to 34, according to Nielsen Media Research.

On the morning after what the VH1 channel called Spears' "already historic" performance, the blogosphere was buzzing with opinions. For every "fat" comment there was an impassioned retort. "Give her a break," wrote one blogger on Aboutthink.com. "The girl's had two kids -- I hope I'm a size 10 after having kids!"

"OK, she isn't fat," wrote another. "But she isn't fit enough to be wearing (or not wearing) what she is."

For many observers, the issue was not so much the body, but the body in THAT outfit.

"In that ensemble, you just can't have an ounce of anything extra," said Janice Min, editor of the celebrity magazine US Weekly. "Many women wouldn't eat for days if they were wearing that."

"Did she look better than 99 percent of women? Yes," added Min. "But compared to her earlier form, she probably didn't look as good."

Besides, said Min, "Britney Spears has always been about the whole package. It's never been 100 percent about the talent. Is it sexist? Probably, but she's built a career on an image of sexiness."

Talk of Spears' physique comes amid an increasingly critical focus on overly skinny actresses in Hollywood, who've largely replaced supermodels as the world's fashion plates. It's hard to pick up a celebrity magazine without a critical photo of, say, Angelina Jolie's birdlike arms. And curvy actresses are getting positive attention, from Oscar-winner Jennifer Hudson of "Dreamgirls" to Golden Globe-winner America Ferrara of TV's "Ugly Betty."

In the fashion industry, there's been an effort to promote healthier-looking models. "Girls aren't looking as skinny this season as they did," said Suze Yalof Scwhartz, executive editor-at-large for Glamour magazine. "There's food backstage. They're looking sexier." At Glamour, she noted, a model won't be featured "if she shows too much clavicle."

The nastier headlines about Spears are uncalled for, Schwartz said, but at the same time, "when you walk around the stage in a black bikini in front of millions of viewers, people are going to notice." She added that though Spears doesn't have the perfect body she once did, "Most women would die for the body she has now."

An obvious question is whether a male performer would have been subjected to the same standards. Many would say no; Dave Zinczenko, editor of Men's Health magazine, says yes.

"Listen, any time you go on national television and dance in barely any clothing, you're going to be facing a lot of scrutiny," Zinczenko says. "Anybody would be asking for it." Not that many people weren't pulling for Spears, he notes: "If she had come back, she would have been the toast of the country."

And certainly she had a lot to come back from over the past few years: Well-documented parenting mishaps -- remember the baby on her lap in the driver's seat? A messy divorce from husband Kevin Federline. The famous crotch photos. The bizarre head-shaving incident. Rehab.

"I kind of feel bad for her," said Shelley Wade, a DJ at New York City pop station Z100. "She looked really nervous. And then, now I'm looking at all these blogs this morning about how everybody thinks she's fat and I'm like, 'What! Fat?' She wasn't fat."

How all this will impact Spears' career, and sales of her new album, has yet to be seen. "I just felt like that performance was make or break for her comeback," says Wade. "Now with last night's performance, she's just kind of put herself back in the same boat ... everybody thinks she's a train wreck."

But the single of "Gimme More," the song she destroyed onstage, is off to a great start in the Top 40, says Sean Ross of Edison Research, which tracks radio play. "A great VMA performance would have probably closed the deal for her, but she's still got until Thanksgiving to do other good performances and to release a strong album with other hits on it," he said.

In any case, it seems it would never be wise to write an obituary of Spears' career.

"With everything Britney, we think this is the last chance," says Min. "The fact is, it never is.

"At least this puts attention back on her as a performer. My sense is she'd rather be judged on that than on the rehab, the drinking and the partying."