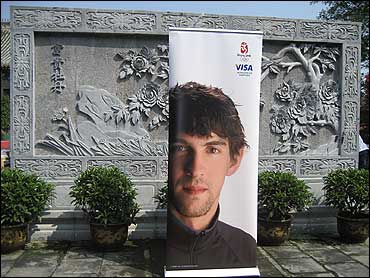 I got my fifteen minutes of fame with Michael Phelps today. Ok, I lied, it was really closer to seven minutes. But, I have to confess I was pretty psyched to interview the super-star of the Beijing games.

It was around eight o'clock in the evening local time for Phelps, and he looked like a guy who had been up for about three days straight. No kidding, he could barely keep his eyes open. I asked the usual reporter type questions. Which he did gamely answer, but he brightened perceptibly when I said, "And now we have some questions from some young members of the Wolverine Swim Club back in Ann Arbor, Mich., where you've been training for several years."

The kids asked better questions, of course, including "How do you keep from getting psyched out by tough competitors?" Answer: By listening to his iPod, and concentrating on what he has to do. And "What did you have to sacrifice as a teenager in order to do what you've done?"

Answer: Stay in on Friday nights, and yes, it was worth it.