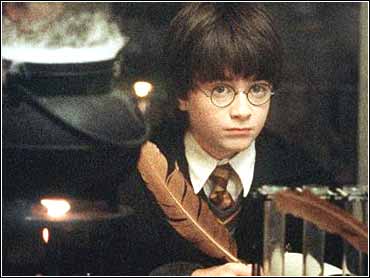 All films not named "Harry Potter and the Sorcerer's Stone," please raise your hands so audiences will know you'll be in theaters this holiday season.

Not since "Star Wars" returned with "The Phantom Menace" have moviegoers been so eager for a single movie.

And for a world abruptly cast into a war on terrorism, "Harry Potter" may be the ideal cinematic salve, a journey into a parallel world where magic rules and goodness triumphs.

"I've rarely read anything this imaginative and unique and also funny," "Harry Potter" director Chris Columbus said of J.K. Rowling's fiction phenomenon about a boy wizard fighting evil at a school of witchcraft. "It's the ultimate fantasy that gives kids hope there's somewhere else they can go in their lives, and for adults, gives them the feeling of being 11 years old again."

Harry Potter's magic may give shares of Internet and media giant AOL Time Warner Inc. a boost, but some analysts cautioned investors about being swept up in the spell.

AOL Time Warner likely has a mega-hit on its hands with the movie, which will debut in the United States on Friday. Harry Potter has already opened to rave reviews in London, where it premiered last week.

But analysts cautioned that even a blockbuster hit means little for the overall bottom-line health of the Internet and media giant.

The movie could bring about $500 million to $660 million in profits to AOL Time Warner during the life cycle of the film, DB Alex. Brown analyst Douglas Mitchelson said in a recent research note.

"Harry Potter" also has the opportunity to be a strong franchise, such as "Star Wars" or the "James Bond" series, offering a host of merchandising possibilities -- even though Rowling has asked for limitations on licensing pacts, Salomon Smith Barney analysts Jill Krutick and Lanny Baker said in a note.

"Harry Potter and the Sorcerer's Stone" is based on the first of the four Harry Potter books already written by Rowling, and the author has plans for three more books.

Analysts said AOL Time Warner has been able to minimize its promotion and ad budgets to about two-thirds of the normal for the movie because the books have been such a phenomenon, and the company can use its own internal marketing machine to promote the movies.

AOL also struck an exclusive promotional pact with Coca-Cola Co., and the beverage giant is spending $100 million in its Harry Potter ad and promotions campaign.

A hit movie could help alleviate some of the pressures AOL Time Warner is facing amid an advertising slump and economic uncertainty. The effect may be limited, analysts said.

"This week I expect somewhat inane speculation about how big the movie will be and I expect investors to come back down to reality next week even if it is the biggest movie ever," said Jordan Rohan, analyst at Soundview. "The financial impact of any one movie or even franchise will be dwarfed by AOL Time Warner's 4.6 billion outstanding shares."

"'The Sorcerer's Stone' will most likely be a tremendous hit, but several potential flops next year could negate most of those gains," said Paul Kim, analyst at Kaufman Brothers. "Calculating the impact of Harry Potter in a financial vacuum is pure folly, in our view."

For instance, in the first quarter of this year Metro-Goldwyn-Mayer had the highest ever box-office open in February for "Hannibal," generating a record $58 million. The studio then had flops with "What's the Worst that Could Happen" and "Josie and the Pussycats," culminating in a quarterly loss.