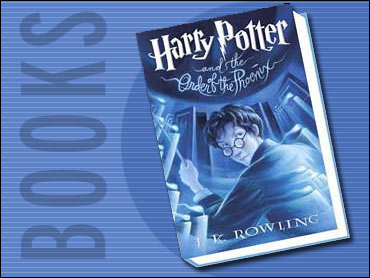 The fifth novel in the popular Harry Potter series, due out in one month, will be Amazon.com's largest new product release, the online retailer said Wednesday.

The Seattle-based company said that more than 500,000 copies of "Harry Potter and the Order of the Phoenix" were ordered in just four months on www.amazon.com. Amazon.com has received more than 875,000 orders for the book on all of its Web sites worldwide.

The book, published in the United States by Scholastic Children's Books, has been Amazon's No. 1 best seller since its publication was announced in January.

"Harry Potter and the Goblet of Fire" was previously Amazon.com's largest new product release, with more than 350,000 orders placed on the site in the five months leading up to its July 8, 2000, release; 410,000 copies ordered in advance of its release on Amazon sites worldwide.

Meanwhile, Borders Group, Inc., the nation's second-largest bookseller behind Barnes & Noble Inc., said that it has over 500,000 pre-orders, according to Emily Swann, a company spokeswoman. She said the retailer would at least be able to meet the pre-order demand on June 21, the opening day.

Caroline Brown, a spokeswoman for Barnes & Noble Inc., declined to comment on the exact number of pre-orders, but the number was in the several hundred thousand range.

Judy Corman, spokeswoman for Scholastic, said that there will be 6.8 million copies of "Order of the Phoenix" on the opening day, with another 1.7 million within the following two weeks.