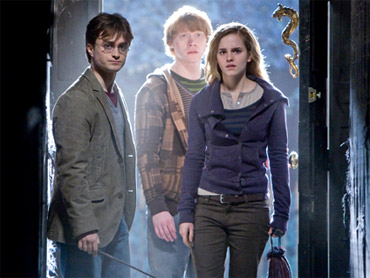 (CBS) Those of you who can't wait until July 15 to see the concluding film in the "Harry Potter" series can now see three minutes of it online.

Worstpreviews.com has video of the leaked scene, which features Daniel Radcliffe as Harry talking to Ollivander, played by John Hurt, about the deathly hallows.

The video is mediocre quality - a handheld video recording of a television - but that's not likely to deter anyone who wants to see it.

In its review of the "Harry Potter and the Deathly Hallows: Part 1" Blu-Ray disc, which hits stores April 15, Blu-ray.com reports that a "Part 2" sneak peek is included. (In the video ad for the disc on Warner Bros.' website, there is indeed a sticker on the DVD box that reads, "Includes an opening scene of the final film" and a voiceover announcement about it.)

Worstpreviews.com reports that "most claim that the opening scene is nowhere to be found" (they don't explain who "most" is), though the site adds that Warner Bros. will make the scene available through BD-Live when the Blu-Ray disc is officially released.