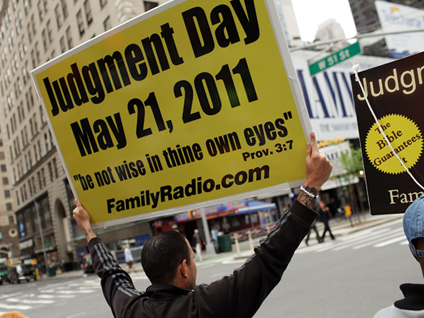 ALAMEDA, Calif. - The day after his prediction that the world would end on May 21, 2011 failed to materialize, Harold Camping told the San Francisco Chronicle he was "flabbergasted."

The 89-year-old fundamentalist minister and head of the Family Radio media empire, who had led his Christian followers to believe last Saturday marked the Rapture and the countdown to Judgment Day, told the Associated Press that he will make a full statement on his radio broadcast later on Monday.

But when he answered the door at his Alameda home to San Francisco Chronicle reporter Will Kane on Sunday, Camping said he was looking for answers - through frequent prayer and discussions with friends - as to why his prediction of the Rapture and the run-up to the destruction of Earth had not come to pass.

"It has been a really tough weekend," said Camping.

Some of Camping's followers say they are surprised they were not swept up to heaven, after Camping preached for years through his Oakland-based Family Radio International media empire that the Rapture was coming on May 21.

Camping had previously predicted the Rapture would occur back in 1994. When it didn't, he explained that an error in his mathematical computations from clues in the Bible were to blame, and he later revised his forecast.

Along with the disappointment, believers who spent their savings to advertise the world's end are now facing more earthly concerns.

In New York's Times Square, Robert Fitzpatrick, of Staten Island, said he was surprised when the six o'clock hour simply came and went. He had spent his own money to put up advertising about the end of the world.

"I can't tell you what I feel right now," he said, surrounded by tourists. "Obviously, I haven't understood it correctly because we're still here."

Many followers said the delay was a further test from God to persevere in their faith.

"It's still May 21 and God's going to bring it," said Family Radio's special projects coordinator Michael Garcia, who spent Saturday morning praying and drinking two last cups of coffee with his wife at home in Alameda. "When you say something and it doesn't happen, your pride is what's hurt. But who needs pride? God said he resists the proud and gives grace to the humble."