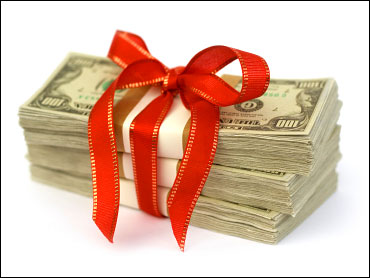 It's no secret that investment bankers are well-compensated, mostly through year-end bonuses, especially during bull markets.

But can they still count on those big bonuses this year, in the midst of the financial crisis and market freefall?

CBS News correspondent Priya David spoke with several compensation consultants who said that, even in this economy, firms are worried that, if they don't pay out the bonuses, they'll lose their top talent -- people they want to keep around for when pastures turn green again.

On The Early Show Wednesday, David reported that lawmakers and taxpayers alike are concerned about where the money for those bonuses will come from.

For Wall Street workers still employed, there could be a hefty bonus in their checks next month.

According to a report from financial news agency Bloomberg, Goldman Sachs, for example, has set aside $6.8 billion for bonuses, and Morgan Stanley, $6.4 billion.

And the chairman of the House Financial Services Committee, Massachusetts Democrat Barney Frank, isn't happy. "These are people who lost enormous amounts of money," Frank observes. "How do you give a bonus to someone for having failed so badly as many of these people did?"

What's got many on Main Street and Capitol Hill angry, David says, is the possibility that some of the $700 billion government bailout package could go into the pockets of Wall Streeters to pay their bonuses.

"All of the money is to go into new loans," Frank points out. "None of it is to go into compensation of any kind for the employees."

New York State Attorney General Andrew Cuomo has opened an investigation into the Wall Street bonuses. He sent a letter to nine financial institutions, demanding "a detailed accounting regarding your expected payments to top management in the upcoming bonus season."

Cuomo told CBS News, "These are tax dollars that are going to these institutions, and I believe the taxpayers have a right to hold the institutions accountable for what they're doing with their money."

The bailout package specifies that the top five executives of a company cannot get a golden parachute, but doesn't limit compensation for any other employees. Some observers, such as financial expert and reporter Stephen Gandel, say bonuses are expected to be down, but not as much as they might have been without the bailout.

Gandel, who's a Money magazine senior writer and contributor to Time.com says, "Compensation should be down 70 percent but, because all this new money is coming from the government, the firms are now saying they can pay more, and so they're only going to cut bonuses by 40 percent."

Even without bonuses, the mean annual salary for a securities industry employee was just under $400,000, David notes, ten times more than the average U.S. worker.

One woman in New York's financial district remarked to David, "You have people losing their houses, people on the street, they can't feed themselves, while these people are just banking on (their bonuses)."

There's a shroud of secrecy around hundreds of billions of government dollars that have been given to Wall Street outside of the bailout money. The Federal Reserve has refused to say which banks are getting how much of that pie, and now one financial news agency, Bloomberg, is actually suing to get that information.

Editor's Note: This story was updated to clarify that the Bloomberg lawsuit pertains to funds given in addition to, but not a part of, the bailout package.